The Gallery & the Archive 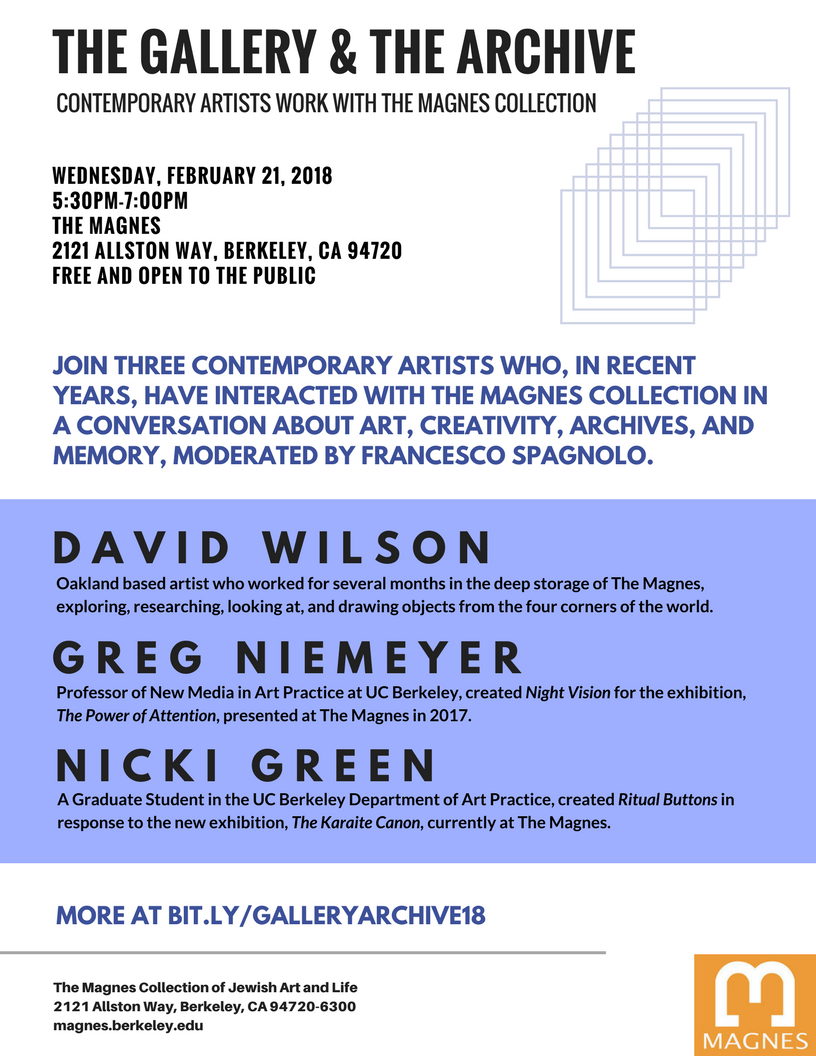 Free and open to the Public

Join David Wilson, Greg Niemeyer and Nicki Green, three contemporary artists who, in recent years, have interacted with The Magnes Collection and contributed to exhibitions that intersect new works with art and artifacts from the collection itself, in a conversation about art, creativity, archives, and memory, moderated by Francesco Spagnolo.

David Wilson, an artist based in Oakland, worked for several months in the deep storage of The Magnes, exploring, researching, looking at, and drawing objects from the four corners of the world. Each drawing session culminated in a conversation with Francesco Spagnolo, who expanded on and played with the origins and meanings of the objects he portrayed. The results of their collaboration animated mima‘amaqim. from the depths of collections, an exhibition presented at the Contemporary Jewish Museum in San Francisco in 2015.

Greg Niemeyer, Professor of New Media in Art Practice at UC Berkeley, created Night Vision for the exhibition, The Power of Attention, presented at The Magnes in 2017. The work’s computer-generated image traces the menorah anchored in the night vision of prophet Zechariah. Its shape is constantly redrawn in a sea of GIF animations from the Internet Archive, layering, moving, and blurring them to suggest strata of digital memory. Above these layers, the program draws and redraws the basic shape of the menorah, the pipes and the two olive trees from Zechariah’s vision. The colors change from cycle to cycle and from day to day. The animations interweave the noise of contemporary with the pure spiritual form of the menorah, and invite us to answer the same question that Zechariah was asked: “What seest thou?”

Nicki Green, a Graduate Student in the UC Berkeley Department of Art Practice, was invited by Francesco Spagnolo, to create a new work in response to the ritual objects in the new exhibition, The Karaite Canon. This resulted in Ritual Buttons, reflecting the particularity of Karaite prayer shawls and ritual fringes (Heb. tzitzit). A signed and numbered 18-piece limited artist edition of four ceramic button sets with “tzitzitbags,” this new work interrogates ritual practice and the possibility to innovate within a tradition.The project seeks to identify that even in the most direct and fundamental interpretation of text, one is always adapting and filtering law and practice through the lens of one’sbody, offering a place for expansiveness and innovation.

David Wilson is an artist based in Oakland, CA, who creates observational drawings based in landscape experience and orchestrates site-specific gatherings that draw together a wide net of artists, performers, filmmakers, chefs, and artisans into collaborative relationships. He recently organized the experimental exhibition The Possible at the Berkeley Art Museum and Pacific Film Archive, and received the San Francisco Museum of Modern Art’s 2012 SECA Art Award. He has exhibited his work with SFMOMA, was included in the 2010 CA Biennial at the Orange County Museum of Art, had a solo Matrix exhibition at BAM/PFA, and has received grants from The Andy Warhol Foundation, Southern Exposure, and The Center for Craft, Creativity, and Design. More at davidwilsonandribbons.com

Born in Switzerland in 1967, Gregory Niemeyer studied Classics and Photography. He started working with new media when he arrived in the San Francisco Bay Area in 1992. He received his MFA from Stanford University in New Media in 1997. At the same time, he founded the Stanford University Digital Art Center. In 2001 he was appointed at UC Berkeley as a Professor for New Media in Art Practice. He co-founded and directed the Center for New Media, focusing on the critical analysis of the impact of new media on human experiences. His current work focuses on mediations between individuals, communities and environments: When do technologies dehumanize us, and when do they help us deepen human experiences? More at http://gregniemeyer.com.

Nicki Green is a transdisciplinary artist based in San Francisco whose work explores topics of history preservation, ornamentation, craft processes and the aesthetics of Otherness. Originally from New England, she received a BFA from the San Francisco Art Institute in 2009 and will complete her MFA in Art Practice at the University of California, Berkeley in 2018. She has exhibited her work internationally, notably at the Leslie Lohman Museum of Gay and Lesbian Art in New York, The Contemporary Jewish Museum in San Francisco and Broken Dimanche Press in Berlin, Germany. More at nickigreen.org.

The Gallery & the Archive by magnesmuseum on Scribd