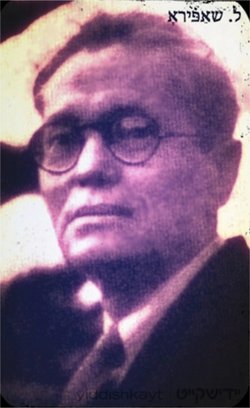 Come learn about Yiddish at the first meeting of the Working Group this semester, on Wednesday 28 January 2015, 4:30pm-6pm!

This session will highlight the Magnes’s holdings of Western Yiddish Americana imprints, consisting of original Yiddish literature printed in California until the middle of the twentieth century. Our guest Danny Luzon will help us connect these literary pieces with the prose of Lamed Shapiro (1878-1948) whose works used minimalist, modernist techniques to portray the social and psychological tensions of the Eastern European Jews during an age of mass immigration to the U.S. Shapiro’s life was characterized by constant geographical shifts, especially between New York and Los Angeles, yet the American experience he depicts in his fiction is located almost exclusively in New York. The literary pieces we offer for discussion include:

ABOUT THE WORKING GROUP

The Townsend/Magnes Working Group in Modern Jewish Culture meets once a month to discuss scholarly issues in conjunction with specific items from the Magnes’s extensive holdings.

Due to space considerations, Working Group sessions are limited to current students, post-doctoral scholars and faculty.