Dissolving Localities: Conversation with the Artist 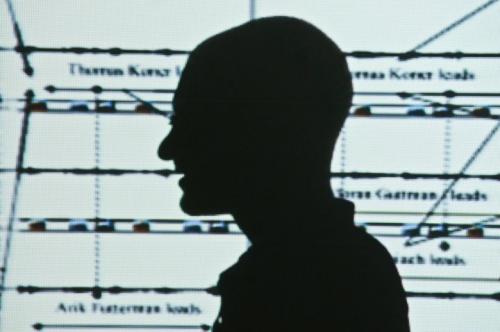 Multimedia artist Emmanuel Witzthum (Jerusalem) and scholar Jeffrey Shandler (Rutgers University), in conversation with Francesco Spagnolo (The Magnes, UC Berkeley), will discuss Witzthum’s audiovisual installation, Dissolving Localities | Berkeley Jerusalem (on view at The Magnes until July 3, 2012), and unveil the Jerusalem/Berkeley component of the project to the public.

With the participation of violist Nils Bultmann (CNMAT, UC Berkeley).

Emmanuel Witzthum’s multimedia project, Dissolving Localities, has focused for the last several years on the layers that compose the city of Jerusalem. Witzhum and the artists he invited “perform” the city as a musical/visual instrument. By interweaving recorded sights and sounds, ranging from birds’ songs to street noise, from prayer fragments to church bells, the project creates an expanding open-source multimedia montage, highlighting contrasts and unexpected harmonies. As an artist-in-residence at UC Berkeley during the Spring of 2012, Witzthum extended the Jerusalem-based project, building an expanding dialogue between Jerusalem, his hometown, and Berkeley.

The program includes the premiere of the recently completed installation of Dissolving Localities, as well as a performance of Witzthum’s Shma (2003) for viola and voice, based on a poem by Hanoch Levin.

Emmanuel Witzthum is a composer, violist, curator and lecturer. He served as director of Ha-ma’abadah (The Lab) in Jerusalem, a venue for experimental theater, dance, and music, and as musical advisor to the Israel Festival, the premier festival for the arts in Israel. He has performed and recorded as violist with numerous ensembles such as Ensemble Inter-contemporain, The Orpheus Chamber Orchestra, The Berlin Staatskapelle among others. He was guest artist in Berlin of the DAAD Berlin Artists program in 2001 and participated in the year long cursus at IRCAM in 1999.

Jeffrey Shandler is Professor of Jewish Studies at Rutgers University. He is author of Jews, God, and Videotape: Religion and Media in America (New York University Press, 2009), Adventures in Yiddishland. Postvernacular Language and Culture (UC Press 2005) and While America Watches: Televising the Holocaust (Oxford UP 1999), among other books. He lives in New York.

Francesco Spagnolo is the Curator of The Magnes Collection of Jewish Art and Life and a Lecturer in the Department of Music at the University of California Berkeley, and a host of cultural programs for RAI (Italian National Radio). He is the author of The Dance of the Chameleon (CUEM 2000), and editor of Aesthetics of Extreme Situations (CUEM 2001), of Imre Toth’s Palimpsest (1998 and 2003), and of the audio-anthology, Italian Jewish Musical Traditions (Hebrew University of Jerusalem 2002 and 2006).

Nils Bultmann is a violist, improviser, and composer currently based in the San Francisco bay area. Rooted in classical technique and tradition, he has developed his own voice within the context of a wide variety of musical styles and art forms. Visit his website at http://www.nilsbultmann.com/

This program is presented in partnership with the Department of Music and The Doreen B. Townsend Center for the Humanities at UC Berkeley.
The residency of Emmanuel Witzthum at the University of California, Berkeley, for the Spring of 2012 has been made possible by the Charles and Lynn Schusterman Family Foundation’s Visiting Israeli Artists Program.
The Dissolving Localities project has benefitted from the support of The Gesher Multicultural Film Fund.
+ Add to Google Calendar+ Add to iCalendar+ Export .ics file