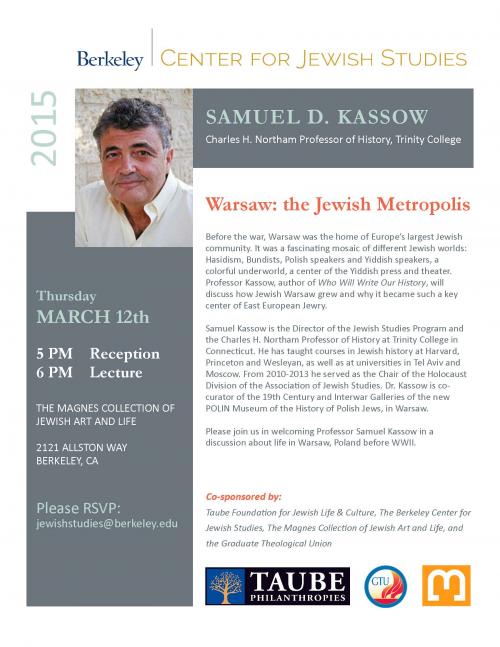 Before the war, Warsaw was the home of Europe’s largest Jewish community. It was a fascinating mosaic of different Jewish worlds: Hasidism, Bundists, Polish speakers and Yiddish speakers, a colorful underworld, a center of the Yiddish press and theater. Professor Kassow, author of Who Will Write Our History, will discuss how Jewish Warsaw grew and why it became such a key center of East European Jewry. Samuel Kassow is the Director of the Jewish Studies Program and the Charles H. Northam Professor of History at Trinity College in Connecticut. He has taught courses in Jewish history at Harvard, Princeton and Wesleyan, as well as at universities in Tel Aviv and Moscow. From 2010-2013 he served as the Chair of the Holocaust Division of the Association of Jewish Studies. Dr. Kassow is cocurator of the 19th Century and Interwar Galleries of the new POLIN Museum of the History of Polish Jews, in Warsaw. Please join us in welcoming Professor Samuel Kassow in a discussion about life in Warsaw, Poland before WWII.