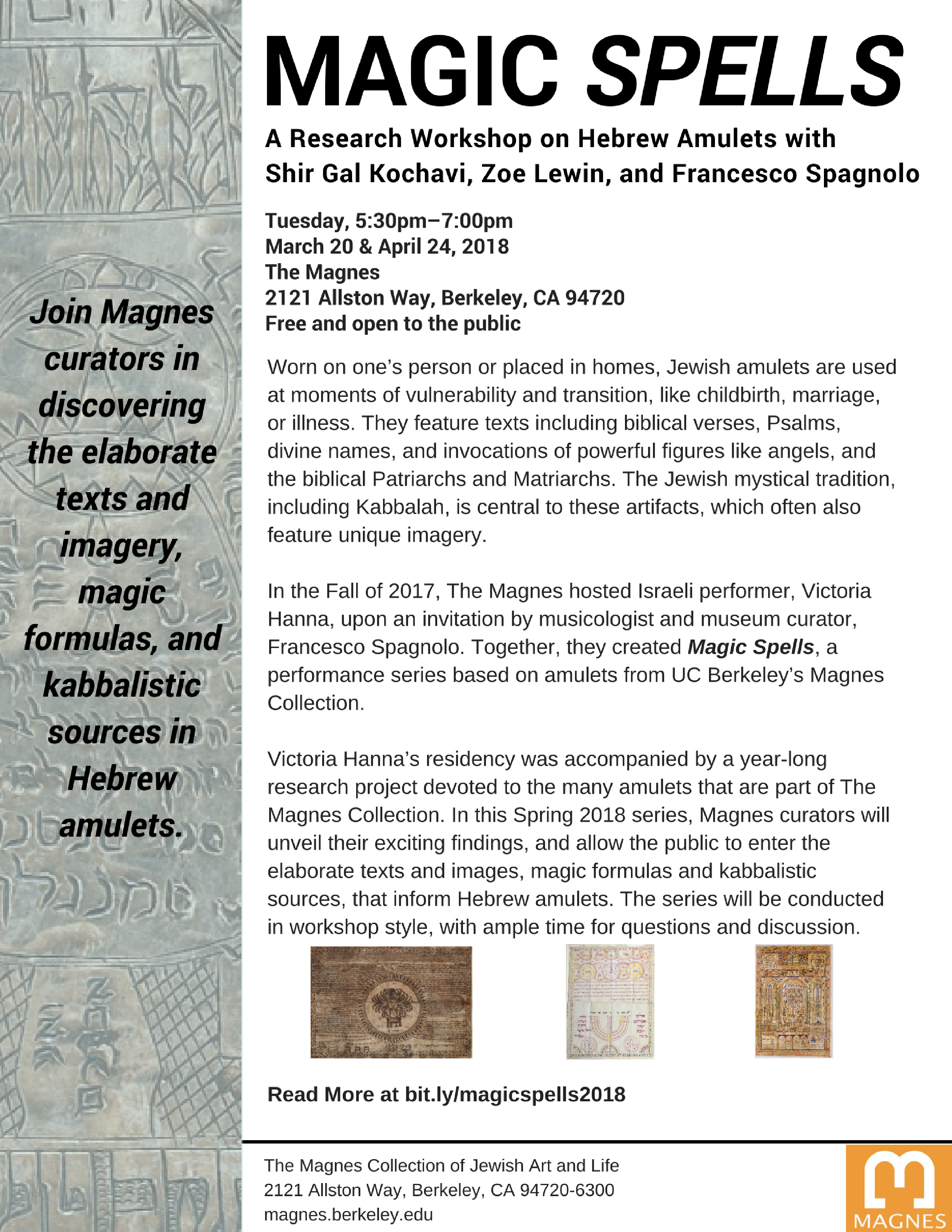 Please note: The February 27 event has been canceled. The series will begin on March 20.

Worn on one’s person or placed in homes, Jewish amulets are used at moments of vulnerability and transition, like childbirth, marriage, or illness. They feature texts including biblical verses, Psalms, divine names, and invocations of powerful figures like angels, and the biblical Patriarchs and Matriarchs. The Jewish mystical tradition, including Kabbalah, is central to these artifacts, which often also feature unique imagery.

In the Fall of 2017, The Magnes hosted Israeli performer, Victoria Hanna. Upon an invitation by musicologist and museum curator, Francesco Spagnolo, together they created Magic Spells, a performance series based on amulets from UC Berkeley’s Magnes Collection, in the context of his course, Jewish Nightlife (Fall 2017). Their collaboration centers on the idea that these documents can be performed, on the basis of their textual and visual content, as unique “musical scores.”

Victoria Hanna’s residency was accompanied by a year-long research project devoted to the many amulets that are part of The Magnes Collection. In this Spring 2018 series, Magnes curators will unveil their exciting findings, and allow the public to enter the elaborate texts and images, magic formulas and kabbalistic sources, that inform Hebrew amulets. The series will be conducted in workshop style, with ample time for questions and discussion.

Shir Kochavi, Assistant Curator, recently received her PhD from the University of Leeds, UK, and holds an MA in The History of Business of Art and Collecting from the Institut d’Études Supérieures des Arts, Paris and the University of Warwick, UK, as well as an MA in Law Studies from Bar Ilan University, Israel. Before moving to the Bay Area, she worked as a provenance researcher at the Company for Location and Restitution of Holocaust Victims’ Assets in Israel and in Art Galleries in London and Tel Aviv.

Zoe Lewin, Curatorial Assistant, holds a BA from UC Berkeley in History of Art and Rhetoric, focusing on photography and public discourse respectively. As a UC Berkeley Undergraduate student, Zoe worked at The Magnes from Fall 2013 to Spring 2016, and has since taken part in several research  and exhibitions projects.

Francesco Spagnolo, Curator (PhD, Hebrew University of Jerusalem, 2007) is a multidisciplinary scholar focusing on Jewish studies, music and digital media. At UC Berkeley he is also an Associate Adjunct Professor in the Department of Music, and an affiliated faculty with the Berkeley Center for the Study of Religion and the Religious Diversity Cluster of the Haas Institute, and serves on the Digital Humanities Council.