MAGIC SPELLS | A Final Meeting with Victoria Hanna, Francesco Spagnolo and the Students in the UC Berkeley Course, “Jewish Nightlife” 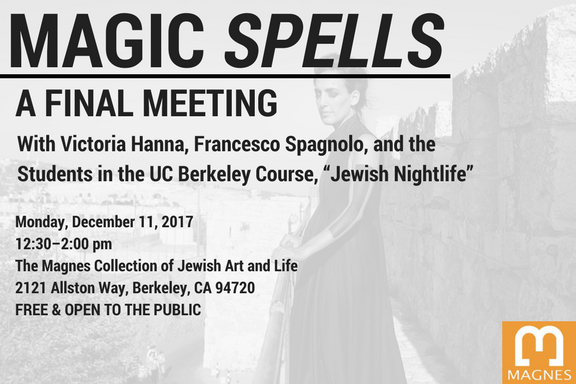 Free and Open to the Public

Join Schusterman Visiting Artist Victoria Hanna, Professor Francesco Spagnolo, and the students in his UC Berkeley course, Jewish Nightlife, for a final presentation of their work.

In the course of the Fall Semester, “Jewish Nightlife” presented students with an array of learning and performance opportunities. The class studied the connections between the ritual performance of Jewish texts and the dynamics of social change across Jewish history. Students discussed the rise of Kabbalistic nocturnal rituals in the Italian ghettos during the early-modern period; the performance of Hebrew poetry and Arabic music in the Ottoman Empire; and the renaissance of piyyut (Hebrew liturgical poetry) in contemporary Israel. In addition, the class conducted field trips to Berkeley synagogues and leveraged the resources ofThe Magnes Collection of Jewish Art and Life.

For seven weeks, the entire class was also involved in Magic Spells, a performance series at The Magnes, curated by Francesco Spagnolo and featuring Victoria Hanna’s compositions based on Hebrew amulets in The Magnes Collection.

The class will open its Final Exam to the public on Monday, December 11, from 12:30-2 pm, for a concluding session featuring songs, ideas, rituals, and, of course, Hebrew amulets.

Musicologist and museum curator, Francesco Spagnolo, invited Israeli performer, Victoria Hanna, to create Magic Spells, a performance series based on amulets from UC Berkeley’s Magnes Collection, in the context of his course, Jewish Nightlife (Fall 2017). Worn on one’s person or placed in homes, Jewish amulets are used at moments of vulnerability and transition, like childbirth, marriage, or illness. They feature texts including biblical verses, Psalms, divine names, and invocations of powerful figures like angels, and the biblical Patriarchs and Matriarchs. The Jewish mystical tradition, including Kabbalah, is central to these artifacts, which often also feature unique imagery. The collaboration between Victoria Hanna and Francesco Spagnolo centers on the idea that these documents can be also performed, on the basis of their textual and visual content, as unique “musical scores.”

Jerusalem based artist, Victoria Hanna, is a world-renowned composer, creator, performer, researcher, and teacher of voice and language. The daughter of an ultra-orthodox rabbi, she has been greatly influenced by her childhood environment. In her work, she deploys a variety of vocal techniques in the performance of ancient and modern Hebrew texts, among them Sefer Yetzirah (“Book of Creation”), an early Kabbalistic treatise. Victoria draws inspiration from the ancient Hebrew tradition, which relates to the voice, mouth, and Hebrew letters as tools of creation. According to the Kabbalah, the world was created through the 22 letters of the Hebrew alphabet, each one symbolizing and relating to a specific element in the universe and in the human body, each letter an exact signal, sound, and frequency in space. Stylistically, her creations span from traditional Jewish music to new music and hip-hop.

Francesco Spagnolo, a multidisciplinary scholar focusing on Jewish studies, music and digital media, is the Curator of The Magnes Collection of Jewish Art and Life and an Associate Adjunct Professor in the Department of Music at the University of California, Berkeley, as well as a host for the cultural programs of Italian National Radio (RAI) in Rome. At UC Berkeley, he is also an affiliated faculty with the Berkeley Center for the Study of Religion, and serves on the Digital Humanities Council. Intersecting textual, visual and musical cultures, he actively contributes to academia, cultural heritage institutions, as well as live and electronic media, in Europe, Israel and the United States. A specialist of Italian synagogue song, Spagnolo is the editor of Italian Jewish Musical Traditions (Hebrew University, 2006). His most recent book is The Jewish World (Rizzoli, 2014).

Victoria Hanna’s Fall 2017 residency at The Magnes Collection of Jewish Art and Life, UC Berkeley, is supported by the Schusterman Visiting Artist Program of the Israel Institute.