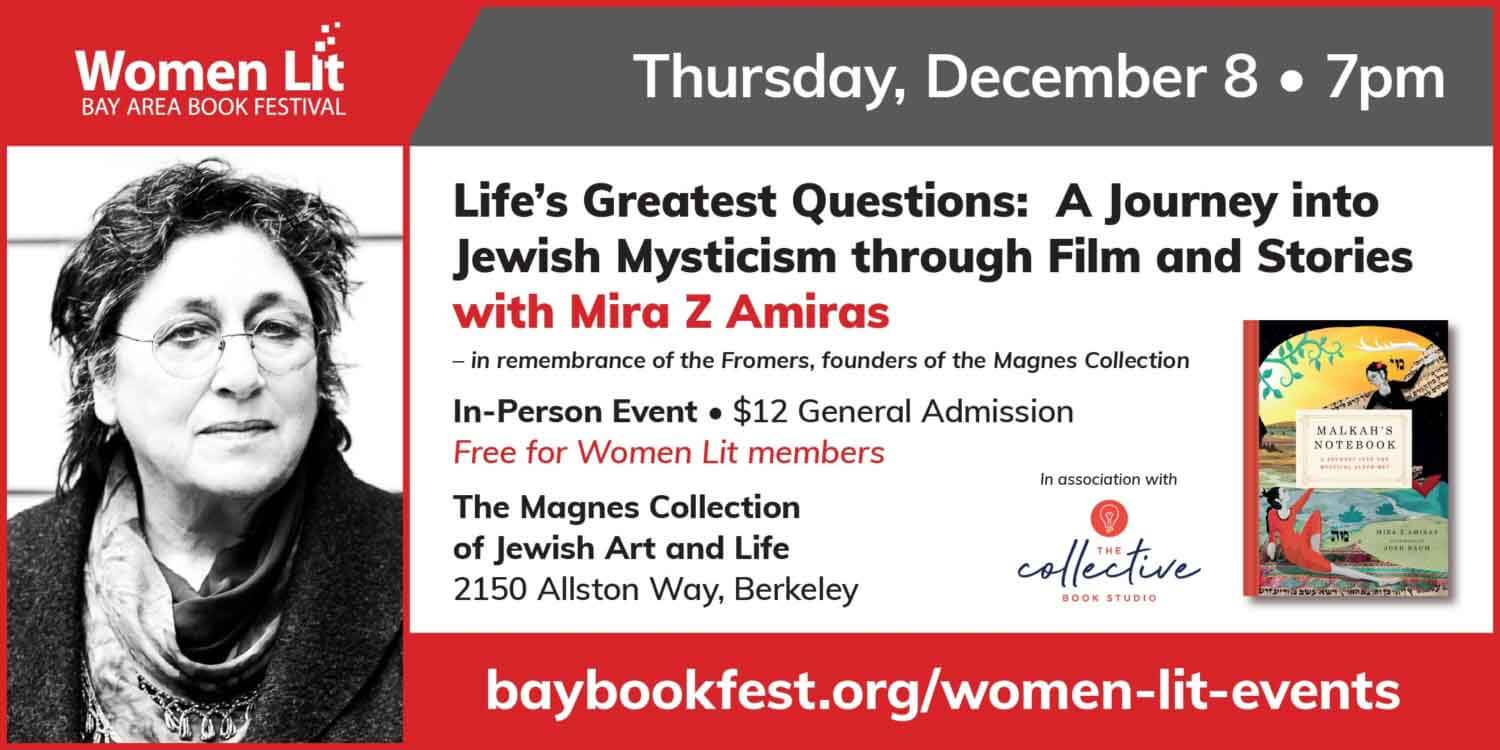 in partnership with The Magnes Collection of Jewish Art and Life

Program features:
Conversation with Mira Z Amiras about her book Malkah’s Notebook: A Journey into the Mystical Aleph-Bet
The Day Before Creation Short Film Screening

We’re pleased to host this event at The Magnes Collection of Jewish Art and Life to honor the hundredth anniversary of the birth of Magnes co-founder Seymour Fromer. Fromer was Amiras’s father and a major influence on her book and film. Celebrate his legacy at this memorable screening and conversation that honors the tradition of Jewish mystical inquiry.

Malkah is an inquisitive girl, and her father’s attempts to teach her to read Torah result in more questions than answers. Those questions only grow in depth and complexity as Malkah herself matures, embracing a lifelong inquiry that begins with the aleph-bet and ventures into Jewish mystical texts, archaeological digs, ancient deities, and the very nature of existence.

That’s the intriguing premise of Mira Z Amiras’s book Malkah’s Notebook: A Journey into the Mystical Aleph-Bet, a riveting, meditative volume enriched with beautiful artwork on every page by artist and scribe Josh Baum. At this immersive event, attendees will accompany Malkah on her profound journey, as Amiras introduces Malkah’s story through a conversation about her book as well as a screening of her award-winning short film, The Day Before Creation, a companion to the book.

The Day Before Creation – Trailer 1 from Mira Amiras on Vimeo.

Copies of Malkah’s Notebook, which makes an ideal keepsake or gift book, will be available for purchase from The Collective Book Studio. Mira Z Amiras was raised on her mother’s accounts of the Inquisition and Holocaust, and her father’s tales of the Hebrew aleph-bet letters and their role in the creation of the universe. Mira Amiras has taught Jewish mysticism, magic, and folklore along with many other topics in Jewish and Islamic studies and the anthropology of religion. She founded the Middle East Studies Program at San Jose State University, where she was Professor of Comparative Religious Studies for over twenty-five years. She received her PhD in anthropology at the University of California, Berkeley, and served as president of the Society for the Anthropology of Consciousness and on the Executive Board of the American Anthropological Association. Mira Amiras is co-founder and facilitator of the Beit Malkhut Study Group, which has been meeting in San Francisco since 1996. Her experimental project, Kaddish in Two-Part Harmony, is a collaboration with musician, Erin Vang. She founded Something Will Emerge Productions in 2012 to take on a new approach in teaching—combining animated film, scholarship, folklore, art, and music to convey concepts that wouldn’t stay put on the chalkboard.