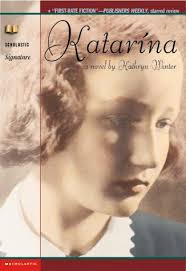 Kathryn Winter was born in Bratislava, Czechoslovakia, before the the start of the Second World War. Her father left for England in the late 1930s, hoping to get his family out of Czechoslovakia, but did not succeed. Kathryn survived the war hiding in barns, farms, an orphanage, and wandering from village to village. After the war, she was reunited with her mother and sister. In 1946, they were reunited with her father, who was already in the United States.

Kathryn’s novel, Katarina, is loosely autobiographical. It follows a Jewish orphan who is living with her aunt and uncle in Slovakia when she is rounded up with other Jews. She is sent to live in a peasant household, but when her Judaism is discovered, she is asked to leave and wanders from village to village, confused by the threat that hangs over her, but sustainedby a fierce belief in her eventual return to her family