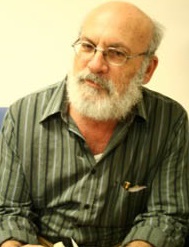 From Joshua to Jesus:

7pm   Tues., April 28      The Galilee as the Land of Israel:
On the Hasmonean Roots of the Galilean Foundational Myth

Elchanan Reiner is Professor Emeritus of Jewish History at Tel Aviv University.  Reiner’s research has focused on Ashkenazic Jewish culture in the early modern period, particularly in Eastern Europe, and on the cultural consequences of the transition from writing to printing.  Reiner also specializes in the study of the popular religious culture of medieval Jews in Palestine, dealing with oral religious traditions and local myths connected to holy places. His early work on pilgrimage to Palestine in the Middle Ages was followed by related publications such as “From Joshua to Jesus: The Transformation of a Biblical Story to a Local Myth (A Chapter in the Religious Life of the Galilean Jew),” in Sharing the Sacred: Religious Contacts and Conflicts in the Holy Land (1998).