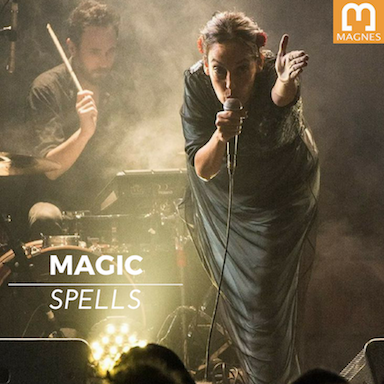 Jerusalem based artist, Victoria Hanna, is a world-renowned composer, creator, performer, researcher, and teacher of voice and language. The daughter of an ultra-orthodox rabbi, she has been greatly influenced by her childhood environment. In her work, she deploys a variety of vocal techniques in the performance of ancient and modern Hebrew texts, among them Sefer Yetzirah (“Book of Creation”), an early Kabbalistic treatise. Victoria draws inspiration from the ancient Hebrew tradition, which relates to the voice, mouth, and Hebrew letters as tools of creation. According to the Kabbalah, the world was created through the 22 letters of the Hebrew alphabet, each one symbolizing and relating to a specific element in the universe and in the human body, each letter an exact signal, sound, and frequency in space. Stylistically, her creations span from traditional Jewish music to new music and hip-hop.

In the course of her residency (Fall 2017), Victoria Hanna will animate Magic Spells, a new weekly performance series at The Magnes, teach a music workshop in a Jewish Studies course taught by Francesco Spagnolo (Jewish Nightlife: Poetry, Music, and Ritual Performance from Renaissance Italy to Contemporary Israel, Jewish 121-001 & Music 139), develop a new performance repertoire based on Hebrew amulets in The Magnes Collection, and collaborate with other UC Berkeley courses and units, as well as present in community settings across the San Francisco Bay Area.

Victoria Hanna’s Fall 2017 residency at The Magnes Collection of Jewish Art and Life, UC Berkeley, is supported by the Schusterman Visiting Artist Program of the Israel Institute.

MAGIC SPELLS: A Weekly Performance Series Featuring Victoria Hanna and Hebrew Amulets from The Magnes Colle… by magnesmuseum on Scribd