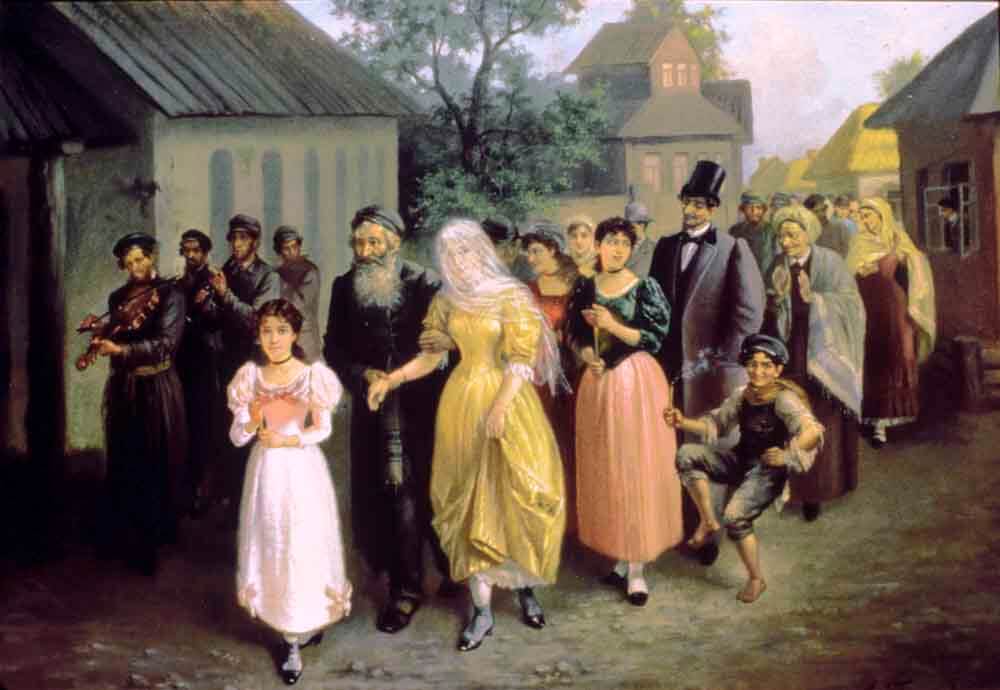 One of the best-known paintings in The Magnes Collection is “The Jewish Wedding,” signed in Cyrillic letters ‘A. Trankowski/y’. According to museum records, its original owner lived in Odessa and then sold the painting in the US in the 1940s.  The painting later turned up in New York and was purchased for the Magnes by friends of the original owner’s daughter.  That information is quite meager but the painting itself is even more of a mystery – who was the artist? When did he paint it?  Why did it become so popular?  And most of all – is it a forgery?

“The Jewish Wedding” was illustrated in the Universal Jewish Encyclopedia (1942) volume 8, p. 578, and in the September 1902 issue of the German Jewish cultural magazine Ost und West. It was also reproduced on a postcard from Berlin printed in Berlin around 1905 and on a similar one from Warsaw.  Still another postcard, probably also early 20th century and perhaps printed in New York, has a Jewish New Year’s greeting and text.

All of these reproductions are slightly different, mostly in the background, from The Magnes painting.

The first Magnes Museum curator had researched Trankowsky for years, consulting experts worldwide but very little information about him – or other paintings by him – came to light although he clearly was an experienced artist. She learned that he was probably from Russia, worked during the late 19th or earlier 20th century, that the signature was pre-Russian revolution in style, and that based on the architecture in the painting it possibly it depicted a village in the Ukraine. She was able to correct some of the original faulty information in the records, including the identification in the Encyclopedia that it was Polish, but it remained a mystery.

Then there was an unexpected turn of events…

A few years earlier, Sotheby’s Tel Aviv had contacted us about a photograph of a similar painting shown to them by a private collector– they had never the actual painting and didn’t know if it was signed. They didn’t know anything about the artist either and wanted to know if we did.

But, last year I received a call from a family in Philadelphia who owned an almost identical painting – they were the ones who had contacted Sotheby’s.  Here is what Dalia Singer wrote after we spoke on the phone:

My father had two older married sisters who chose to remain in Russia (after he immigrated to the US in 1921). Because of no diplomatic relations between Israel and Russia my father lost contact with them. Around 1960 my father’s sister through a relative in the US and with the help of the Jewish Agencies was able to make contact with the family in Israel. As soon as diplomatic relations between Russia and Israel resumed my father flew to Leningrad in April 1965. You were not allowed to travel at that time in Russia so my father’s sister traveled by train from Astrakhan to Leningrad. She brought with her 2 items one of which was the painting rolled up and told him that it had been left on the top of the closet by his parents when they left Russia. She wanted him to have it.

My father needed a permit to take it out of Russia. He had to pay for the permit (there was no signature on the painting). Upon leaving Russia customs required another permit and he had to pay again. I have both receipts.

In 1966 my husband’s aunt from Philadelphia took a trip to Israel for the first time and visited my parents in Tel Aviv. While there she asked my father for a favor, if he would drive her to a cousin of hers – an artist whom she had never met. His name was David Labkowsky. While visiting them my father told him the story of the painting he brought from Russia. After describing the painting Labkowsky jumped up from his chair, ran into the next room and brought back a post card of “a wedding” by A Trankowsky printed in Warsaw. My father begged him to give him the post card which he did.

Dalia Singer had done her own research and discovered that two paintings signed Alexey Ivanovich Trankowski had been offered for sale at the Bruun-Rasmussen auction house in Copenhagen in 2007. Within the last few years, genre paintings – not of Jewish themes – signed ‘Trankovsky’ have been sold at auction in New York as well.

I was able to visit the Singers and look at their painting.  Like all the other reproductions, it too was slightly different from ours – you can see a little boy in the lower right-hand corner who doesn’t appear in ours.  So, is our painting a forgery?

The answer is – yes and no.  An article on Trankovsky, by Vladimir Petrov in the magazine “Antikvarnoe Obozrenie,” was mentioned in the Bruun Rasmussen 2007 online catalog.  Petrov identified Trankowsky as one of a group of Russian genre artists at the end of the 19th century whose work was so popular that their paintings were copied extensively, often with the signatures of the original artist.  Hillel-Grigory Kazovsky, director of the Jewish museum in Moscow, wrote that Trankovsky was a member of the Moscow Union of Artists and was not a Jew but he had no further information about him.  Interestingly, a reference work on Russian salon artists of the late 19th century lists an artist named Trankovsky but with initials M.K., according to an expert at Sotheby’s.

But how and why would this image – clearly a fanciful portrayal of a traditional wedding – have been reproduced in Jewish contexts so soon after it was painted that Jewish publishers must surely have known where it came from?  Michal Friedlander, Judaica curator at the Berlin Jewish museum, suggests that in fact, they may have been happy to find a good reproductive image for illustration even if they knew that the artist wasn’t Jewish. In this case, the reproductions tell us something about the limited availability of Jewish ceremony images in the early twentieth century.  To this day, images by non-Jewish artists are used to illustrate Jewish ceremonies and subjects in Jewish art and culture museum exhibitions and publications.

The painting continues to be reproduced.  Other recent reproductions include the book Picturing Berkeley: A Postcard History By Burl Willes, and also: “Tantsn Is Lebn”: Dancing in Eastern European Jewish Culture by LeeEllen Friedland, Dance Research Journal, Vol. 17, No. 2. (Autumn,1985), pp. 76-80.