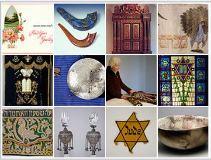 About the PopUp Exhibition Series

Each week, UC Berkeley faculty and students, visiting artists and other notable guests present brief lectures focused on selected treasures from the The Magnes Collection of Jewish Art and Life. One speaker and one object at the time, these “flash” exhibitions include the opportunity to view the art and artifacts discussed intimately and up close.

Check The Magnes calendar and our Facebook page for updates

Martin Jay, the Sidney Hellman Ehrman Professor of History at UC Berkeley, is a historian whose interests include European intellectual history in the 19th-20th centuries, Marxist theory, lying in politics, and visual discourse and culture. His presentation will center on a painting by the German Impressionist artist, Max Liebermann (1847–1935): The Flower Terrace in the Wannsee Garden Seen from the Northeast (Berlin, 1924).

Rachel Biale, born and raised in Kibbutz Kfar Ruppin in Israel, is an author, clinical social worker, community organizer and educator, and parenting consultant based in the San Francisco Bay Area. Her books include Women and Jewish Law (Schocken, 1984), and three illustrated children’s books. Her current project, Lost and Found, is a historical novel based on the true story of a Viennese Jewish family arriving in Palestine in 1940 as illegal immigrants. Her presentation will focus on how furniture (literal and metaphoric) is featured prominently in Talmudic texts about sex and love, and will be accompanied by original items in The Magnes Collection.

Tomasz Tadeusz Koncewicz,a Fulbright Visiting Professor at the Berkeley Law School, is a Professor of European and Comparative Law, the Director of the Department of European and Comparative Law of the University of Gdansk, Poland, and an advocate specializing in litigation before both supranational courts (European Court of Human Rights and the European Court of Justice) and the constitutional court. Prof. Koncewitz represented the daughters of Yiddish poet Naftali Hertz Kon (1910-1971) in recovering his literary estate, confiscated by the Polish communist regime. The presentation will highlight the dynamics of cultural restitution of Jewish assets in Eastern Europe, and will be accompanied by a display of materials from the vanished community of Liptovsky-Mikulasz (Slovakia).

PopUp Exhibition | Carla Shapreau on Researching the Provenance of Lavater and Lessing with Moses Mendelssohn
March 2nd, 2016, Noon to 1PM

Carla Shapreau, a member of the Berkeley Law faculty and a Senior Fellow at the Institute of European Studies at UC Berkeley, will present a case study in provenance research, reconstructing the creation and ownership of the painting by Moritz Daniel Oppenheim, Lavater und Lessing bei Moses Mendelssohn (1857), currently on display at The Magnes.

Brett Lockspeiser studied symbolic systems at Stanford University and works in technology. He led the team that created the Google News Archives, and collaborates with startups and non profits in the Bay Area. Byapplying Silicon Valley techniques and technologies to the world of Jewish texts, together with Joshua Foer Brett founded the Sefaria Project to create a free repository of Jewish texts and a new interactive interface for easy navigation. His presentation will focus on the modes of digital access to classical Jewish texts.

Daniel Schifrin’s fiction and essays have appeared, among other places, in McSweeney’s, the Los Angeles Times, San Francisco Chronicle, Westwind/UCLA’s Journal of the Arts, Jet Fuel Review, and em. He has been a visiting scholar at Stanford University, writer-in-residence at the Contemporary Jewish Museum, and a co-curator for the San Francisco Museum of Modern Art exhibition “Beyond Belief.” He has finished his first novel, a comedy about chess, opera and orthodontia, and a collection of short stories. His presentation will focus on the game of chess represented in Moritz Oppenheim’s painting, Lavater and Lessing Visit Moses Mendelssohn, currently on display at The Magnes.

Gary Handman, Archivist and Public Services Coordinator at The Magnes Collection, is the former Director of the Media Resources Center, Moffitt Library, University of California Berkeley, one of the largest and most respected video collections in a U.S. academic library. Gary has taught, spoken and published widely on topics related to media librarianship, visual literacy, and cultural studies. He is a founding member of the American Library Association Video Round Table, and currently serves as consultant and advisor for a number of national film and video festivals and organizations. In 2010 he received the UC Berkeley Library’s Distinguished Librarian Award for his career contributions to the campus and the field of librarianship. His presentation will focus on the communal patterns of collecting and of cultural activism that characterize the formation of the Global Diaspora Archives of The Magnes.

PopUp Exhibition | Lauren Cooper with Francesco Spagnolo on The Making of From Mendelssohn To Mendelssohn
April 6, 2016, Noon to 1PM

Lauren Cooper, a Comparative Literature major and Spanish and History minor (2016) at UC Berkeley, and the Managing Editor of the Berkeley Fiction Review, has been engaged as an Undergraduate Research Apprentice at The Magnes since 2014. She has collaborated in the making of multiple exhibitions, and helped creating an online companion to the Magnes catalog, The Jewish World (2014). Together with the curator of The Magnes, Dr. Francesco Spagnolo, Lauren will offer a guided tour of the exhibition, From Mendelssohn To Mendelssohn, and present on related collection items that remained on the “cutting floor” during the making of the exhibition.

Yosef Rosen, a Doctoral Candidate in Jewish Studies and Magnes Graduate Fellow (Fall 2015), and Zoe Lewin, an Art History and Rhetoric major (2016) at UC Berkeley, will present on the visual power of text expressed in the shiviti holdings in The Magnes Collection. Shivitis are devotional Hebrew manuscripts aimed at encouraging meditation and the contemplation of God’s name during prayer. Their research constitutes the preparatory work for an upcoming exhibition, tentatively titled The Power of Attention.

Dr. Rebecca Golbert is the Executive Director of the Institute for Jewish Law and Israel Studies at UC Berkeley. Her scholarly work reflects overlapping interests in Jewish and Holocaust studies, anthropology and ethnography, and conflict resolution and mediation.  Her doctoral and postdoctoral research focused on Ukrainian Jewish community and identity and Holocaust memory and memorialization within post-Soviet Ukraine. Her presentation will be accompanied by portraits of Russian Jewish authors made in Kiev in the 1980s by the Ukrainian artist, Matvey Vaisberg (b. 1958).

Pharaonic magic has broadly influenced magic in Antiquity; in particular, ancient Jewish magical texts and practices reveal interesting points of contact with earlier Egyptian sources. During this talk, a few issues concerning a comparative study of magic in Antiquity will be discussed by bringing as a case-study the comparison between ancient Egyptian and Jewish magic. Rita Lucarelli is an Assistant Professor of Egyptology at UC Berkeley whose research interests include magic and demonology in ancient Egypt and the Near East, and ancient Egyptian religious and mortuary iconography.