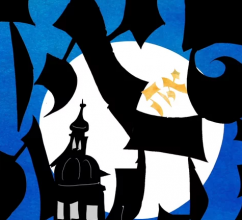 Each week, UC Berkeley faculty and graduate students, visiting artists and other notable guests will present brief lectures focused on selected treasures from the The Magnes Collection of Jewish Art and Life. One speaker and one object at a time, these “flash” exhibitions will include the opportunity to view the art and artifacts discussed intimately and up close.

No lecture on November 23 (Thanksgiving).

Check The Magnes calendar and Facebook page for updates.

PopUp Exhibition | Patricia Munro and Claude Fischer on Coming of Age in Jewish America: the Curious Case of the Bar and Bat Mitzvah

Drawing on Dr. Patricia Munro’s research in Bay Area synagogues, Professor Claude Fischer and Dr. Munro will focus on how the Bar and Bat mitzvah developed into a major American Jewish ritual, how it has both responded to changes in the Jewish community (particularly rising egalitarianism and intermarriage), and how it has changed the Jewish community.

Patricia Keer Munro is a Visiting Scholar at UC Berkeley’s Center for Jewish Studies studying American religion and American Judaism in the 21st century. Her book, Coming of Age in Jewish America: Bar and Bat Mitzvah Reinterpreted (Rutgers 2016), examines the relationship among congregations, the bar/bat mitzvah, and the participants in preparation for and enactment of b’nai mitzvah. Claude Fischer is Professor of the Graduate School in Sociology and a member of the executive board of the Center for Jewish Studies.

Mira Amiras on The Future of a Legacy: Seymour Fromer and the Making of The Magnes

Karen Barkey joined the Department of Sociology at UC Berkeley Sociology in 2016 as the Haas Distinguished Chair in Religious Diversity. Professor Barkey is a major figure in comparative and historical sociology, whose work on the Ottoman Empire illuminates how empires have managed ethnic and religious difference in comparative and historical perspective. Her works include: Bandits and Bureaucrats: The Ottoman Route to State Centralization (Cornell University Press, 1999) and Empire of Difference: The Ottomans in Comparative Perspective (Cambridge University Press, 2008). Her current research examines shared sacred spaces and the politics of pluralism.

In order to answer these questions, Zachary Bleemer, a Graduate Student in Economics has been collaborating with the Digital Humanities-focused Undergraduate Research Apprentice Program (URAP) of The Magnes. Together with a team of undergraduate students, he digitized and textually organized 30 different editions of the Passover Haggadah from The Magnes Collection, published in the United States between 1840 and 2015. The Haggadah, read at the Passover Seder, represents the manifestation of a local Jewish community’s spiritual and communal practice. The digital copies created by the research team can be used to display substantial changes in visual content, as well in text choices, including the words used to translate the Hebrew and Aramaic of the original text into English, and across time and place. The presentation, which will include both original volumes and their digital counterparts, will center on a new Digital Humanities method that aims at quantifying and explicating a community’s beliefs through the analysis of text patterns.

The pinnacle of Jewish immigration to the United States at the turn of the twentieth century coincided with the rise of the phonograph disc (which was itself invented by a Jewish immigrant). This presentation will offer a guided tour of sound clips from the first decades of the twentieth century, including rare 78rpm discs from the Magnes collection, focusing on what these records tell us about the encounter of immigrant Jews and American culture.

Howard Freedman is the director of the Jewish Community Library in San Francisco and a longtime student and collector of Jewish music.

Ashley Bacchi received her Ph.D. at the Graduate Theological Union in 2015 with a dissertation on Uncovering Jewish Creativity: Gender & Intertextuality in Book III of the Sibylline Oracles. She has cultivated an interdisciplinary approach to contextualizing Second Temple Judaism, which includes Art History, Archaeology, Cultural History, Classics, literary theory and feminist theory. She has published in Zutot: Perspectives on Jewish Culture and the Journal of the Bible and Its Reception and has presented at conferences in the US and Europe.

Nick UnderwoodFrom Shund to Avant-garde: Yiddish Theatre in the City of Light