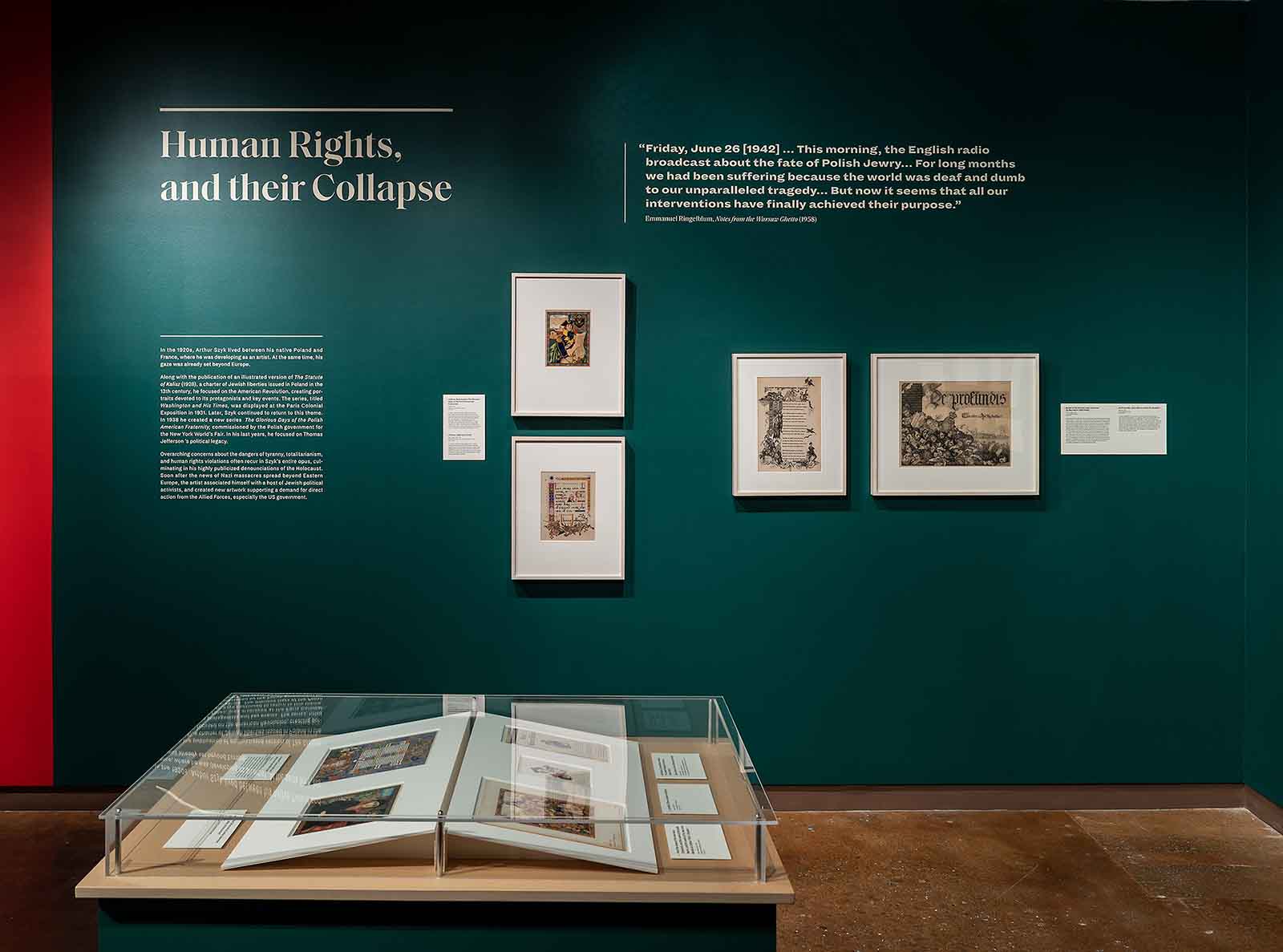 Celebrating the Contemporary Relevance of Arthur Szyk at the Magnes

“Instagram avant la lettre,” said renowned scholar, anthropologist, and museum curator Barbara Kirshenblatt-Gimblett, describing Arthur Szyk’s skillful use of visual imagery as a means of mass communication. Speaking to a capacity crowd at The Magnes Collection of Jewish Art and Life, Dr. Kirshenblatt-Gimblett, a professor at New York University and curator at the POLIN Museum in Warsaw, remarked on the Magnes’curatorial focus on the artist’s critical contributions to the struggle for human rights in the 1940s, and his enduring legacy as a master illustrator and social commentator. 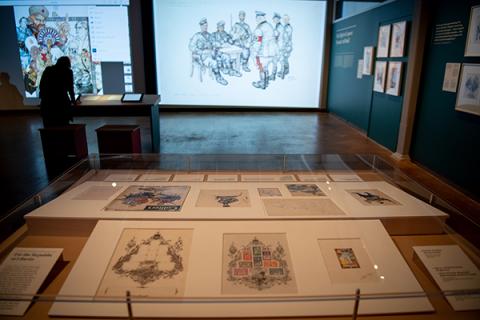 The February 19 event, co-sponsored by the Magnes Collection, Taube Philanthropies, and UC Berkeley, celebrated the opening of In Real Times. Arthur Szyk and Human Rights (1926-1951), an exhibition of the work of the acclaimed Polish Jewish miniaturist and political cartoonist. It also featured remarks from Benjamin Brinner, faculty director of the Magnes, Francesco Spagnolo, the Magnes curator, and philanthropist Tad Taube, whose unprecedented gift made it possible for The Magnes to acquire 450 works of art by Arthur Szyk (1899­–1951) and to establish the Taube Family Arthur Szyk Collection in 2017. Taube said, “Through his prolific pens and paintbrushes, Arthur Szyk showed his strong commitments to democracy, freedom, and justice; to Poland, America and Israel.”

The exhibition gives visitors a sense of the breadth of Szyk’s work, which includes political cartoons, illustrations of critical texts of the Jewish tradition, and stamps and seals that honor the power and importance of democratic ideals. There are also two interactive workstations that invite guests to reframe Szyk’s meticulous images in a collage of their own making. The digital stations, which were designed by Dr. Spagnolo and UC Berkeley students, were clearly a crowd-pleaser at the event — guests of all ages could be seen fashioning Szyk pieces of their own, admiring new creations that were projected on a wall.

Rather than follow a standard biographical or historical order, the exhibition is organized around the theme of human rights, a vital through-line in Szyk’s prolific career. A witness to the rise of totalitarianism in Europe, Szyk emigrated to the United States from Poland in 1940. His political cartoons animated the covers of magazines such as Time Magazine, Collier’s and The Saturday Evening Post, raising awareness of the plight of European Jews and helping to sway public opinion toward support for American participation in the Second World War.

In her lecture, Dr. Kirshenblatt-Gimblett reflected on the wildly disparate aesthetic resonances in Szyk’s work — from the delicacy and precision of Persian miniatures to the humor and irreverence of MAD magazine. A graduate of UC Berkeley, she encouraged the university community to take advantage of the extraordinary learning opportunities offered by the Szyk exhibition and by the Magnes more broadly. She noted that the exhibition serves the development of “21stcentury literacy,” including critical thinking — particularly through the use of the digital tool — as well as media literacy and emotional intelligence. Citing Szyk’s “lexicon of feeling,” Dr. Kirshenblatt-Gimblett remarked on the artist’s capacity to explore every human feeling, from disgust and darkness to liberating humor.

“He smuggles meaning into every image,” said Dr. Kirshenblatt-Gimblett. Showing a series of images of a soldier dismantling a swastika, she emphasized the extraordinary power of Szyk’s imagery, and visual culture as a whole, to inspire positive change. Noting that her first experience with Szyk’s work was with his version of the Passover Haggadah, she emphasized the artist’s deep gift for enlivening traditional texts as well as bringing insight to challenging societal issues.

With his remarks, Mr. Taube also celebrated the power of art in the service of human rights, acknowledging the critical role of the Magnes, which was the first Jewish museum to be established in the United States after the Holocaust, and houses the country’s third-largest Judaica collection. He shared his personal history with Arthur Szyk, who met members of the Taube family in New York in 1940, where they connected over their shared experience as emigres from Hitler’s Europe. Mr. Taube echoed the sentiment expressed by the other speakers, that this exhibition honors history while inviting a younger generation to engage with the enduring relevance of Szyk’s work.

“In Real Times. Arthur Szyk and Human Rights” is on view through May 29, and again from September 1 to December 18. The Magnes will soon announce a public event related the exhibition, which will feature remarks by Benjamin Brinner and Francesco Spagnolo on the Szyk exhibition and the work of photographer Roman Vishniac. Please check the Magnes home page for updates.