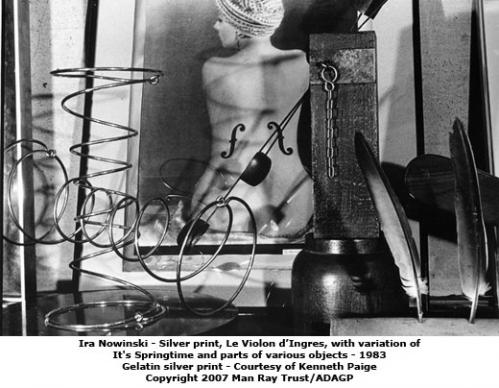 The studio on Rue Ferou in Paris was the home that Man Ray shared with his wife Juliet for twenty-five years. The couple lived and worked there from 1951 until the artist’s death in 1976. Juliet preserved the studio as homage to her late husband. Studio Man Ray includes a series of photographs taken in the studio in 1983 and 1985 by San Francisco photographer Ira Nowinski, capturing the web of work, art, and life created by Man Ray and preserved by Juliet. Nowinski recalls “Man’s presence was everywhere – looking over my shoulder, behind a mirror – and every time I returned I found that some of the objects had mysteriously re-arranged themselves, creating new possibilities and new layers to be discovered.”

The Paris studio on Rue Férou was the home that Man Ray shared with his wife Juliet for twenty-five years. The couple lived and worked there from 1951 until the artist’s death in 1976. Juliet preserved the studio as homage to her late husband, only allowing a select number of people access. All of Man Ray’s studios-in America and France-shared the same qualities: living and working spaces were inseparable; objects, paintings, photographs, and books formed a total installation; the placement and order of each detail was supremely important.

About Ira Nowinski
Ira Nowinski has had a long involvement with the Judah L. Magnes Museum dating to 1983. His groundbreaking book In Fitting Memory: The Art and Politics of Holocaust Memorials written by Sybil Milton was co-published by Wayne State University Press and the Judah L. Magnes Museum in 1991. Nowinski has published half a dozen books, most recently Ira Nowinski’s San Francisco: Poets, Politics, and Divas (The Bancroft Library/Heyday Books, 2006). His photographs have been collected extensively by The Bancroft Library at University of California, Berkeley; Stanford University’s Library and Special Collections; Bibliothque Nationale in Paris; and the Museum of Modern Art, New York. Nowinski received an MFA from the San Francisco Art Institute.

About Man Ray
Born in Philadelphia, Emmanuel Radnitsky (1890-1976) grew up in New Jersey and became a commercial artist in New York in the 1920s. He began to sign his name Man Ray in 1912, although his family did not change its surname to Ray until the 1920s. He initially taught himself photography in order to reproduce his own works of art, which included paintings and mixed media. In 1921 he moved to Paris and set up a photography studio to support himself. During the interwar years he was a significant contributor to both the Dada and Surrealist movements.

This collection of photographs, exhibited for the first time, represents a unique, personal vision of Man Ray’s studio and is published as a book by Nazraeli Press as The Studio of Man Ray (2006)