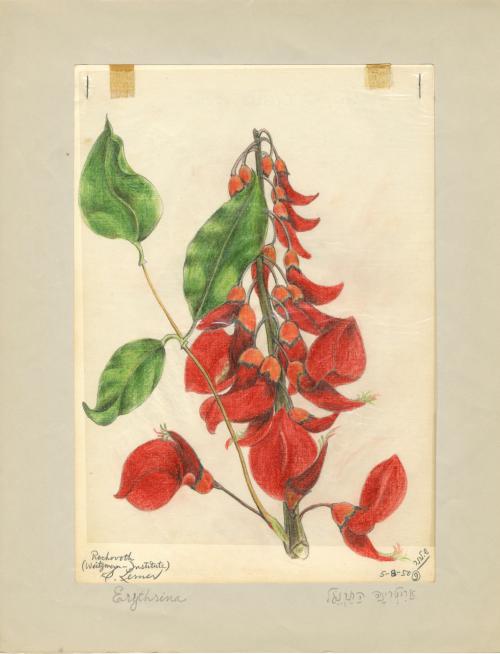 The Secret Language of Flowers. Botanical Drawings from Israel, 1949-1950

In 1984, The Magnes acquired a portfolio of botanical drawings by Shmuel (Samuel) Lerner, a Ukraine-born amateur artist from California. While Lerner’s biography and many details surrounding this work remain obscure, today his drawings open for us a unique window into the landscape, the history and the languages of Israel in the period immediately following the establishment of the State. Born in 1890, possibly in Baranivka, near Zhitomir (northern Ukraine), Shmuel Lerner immigrated to the United States, living first in Ohio, then moving to New York City, and finally settling in Los Angeles. In the 1940s he joined his daughter Ritta (UC Berkeley Class of 1938) and son-in-law Ze’ev Halperin in Palestine, witnessing the aftermath of the War of Independence. Lerner traveled across the new country, documenting his trip by drawing accurate portraits of the plants and flowers he encountered. The resulting portfolio, consisting of sixty-four individual drawings, was probably exhibited in Israel prior to Lerner’s return to Los Angeles, where another exhibition may have taken place, in 1950 or 1951, at the Los Angeles Yiddish Culture Club, a literary organization established in 1926. Lerner eventually moved to Fresno, California, where he passed away in 1981.

Lerner’s drawings were made with graphite and color pencils on individual sheets of white sketch paper, and each sheet was then precariously stapled onto harder paper supports. Each drawing, refined in the detailed views of the plants and flowers it portrayed, was described by the author with precise annotations. 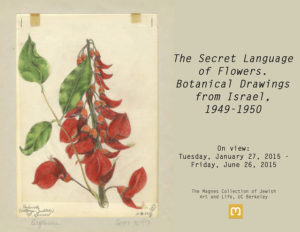 Lerner painstakingly listed the dates and places where the plants had been found, thus drawing a map of the shifting borders of Palestine, Israel and Jordan around 1949. Locations included smaller and larger towns and cities, the likes of Jerusalem, Tel Aviv, Rishon LeZion, and Rehovot, kibbutz communities such as Mishmar HaEmek in the Valley of Jezreel, where a ten-day battle between the Arab Liberation Army and the Haganah had been recently fought, Arab villages devastated by the war like Zir’in, and natural sites across the land, especially the banks of the Yarkon River and the Sea of Galilee (Heb. yam kinneret).

Lerner’s annotations also included the scientific names of the plants he portrayed, in Latin, along with the corresponding Hebrew terms. This linguistic effort, which preceded the establishment of the Academy of the Hebrew Language (1953) by a few years, was based on the use of existing Hebrew terms, on the creation of new ones, and on the phonetic adaptation of botanical names from Latin or English into Hebrew, and reflected the successful attempt to recognize modern Hebrew as the predominant language of the newly established State of Israel. To add to the panoply of cultures involved in his project, Lerner’s portfolio included two title pages, in English, The Flower-World of Israel, and in Yiddish, Yisroel blumen-velt, getsayerent fun shmuel lerner (“The flower world of Israel, drawn by Shmuel Lerner”).

By mapping the new country and providing a direct insight into its recent past, current events, and linguistic and cultural intricacies, Shmuel Lerner’s drawings amount to more than the individual project of an amateur illustrator. In time, they have also become valuable as a primary source that is singularly positioned to inspire further reflection into the complexity of Israel’s history.