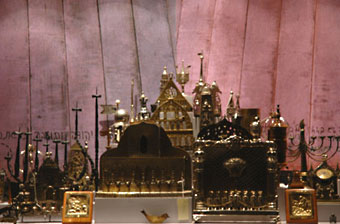 Ideal City is the third in a series of exhibitions entitled REVISIONS where artists, curators, and scholars are invited to create experimental installations inspired by the Magnes’s permanent collections. For the first time, actual artifacts from the museum’s important collection of Jewish ritual objects are going to be used for an installation by a conceptual artist.

Using objects, such as silver spice boxes and Hanukkah lamps, Abramson will build a model skyline to evoke Jerusalem as an ideal city. By contrast, the installation brings into focus the complex relationship between the real Jerusalem on the ground and its ideal representations.

According to the artist, Jerusalem is the original ideal city of Jewish, Christian and Moslem culture. It is the conceptual center of the world, the source, the embodiment of the idea of originality itself. It could be claimed that all other cities are direct or indirect replicas and reflections of Jerusalem as it inspired even the symmetrical geometry of Italy’s Renaissance cities. With the installation at the Magnes, Abramson also presents the conflicts inherent in architecture, such as those echoed by Biblical, then medieval, walls surrounding the city as well as the current controversial security barrier.

In the tradition of such recent artists as Fred Wilson, Abramson involved the museum staff in selecting objects for the installation, incorporating their comments about the project into the gallery design. The exhibition marks the first time that an American Jewish museum opened its collection of ceremonial art to a radical and insightful contemporary reinterpretation.

Abramson was born in South Africa in 1954 and immigrated to Israel in 1961. He taught at the Bezalel Academy of Art and Design from 1984 until 2002 where he served as the chairman of the Academy’s Fine Art Department. In 2003 he completed a residency at the San Francisco Institute of Art, and is currently a professor of art at Shenkar College in Jerusalem. Abramson’s work has been shown throughout the United States and internationally. For a complete list of Abramson’s exhibitions please visit his web page in the online Israel Art Guide.