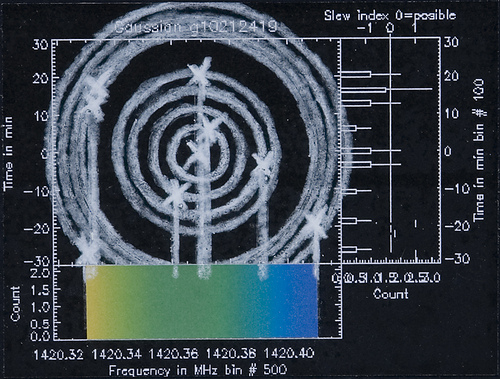 Concluding centuries of speculation about extraterrestrial intelligence, conceptual artist Jonathon Keats has discovered that a radio signal detected by the Arecibo Observatory in Puerto Rico contains artwork broadcast from deep space. Initially dismissed by researchers as meaningless, the transmission — which originated between the constellations Aries and Pisces thousands of years ago — is now claimed to be the most significant addition to the artistic canon since the Mona Lisa, or even the Venus of Willendorf.

Painstakingly decoded and transferred onto canvas by Keats, the artwork was unveiled to the public at the Magnes on July 30, 2006. “This is the ultimate outsider art,” noted Keats. “Historically our culture has ignored extraterrestrial artistic expression. Exhibited at the Magnes, the art becomes accessible to everyone.”

The discovery of artwork from beyond the solar system did not come as a surprise to Keats, who has frequently collaborated with scientists across multiple disciplines. “It’s a familiar story,” he says. “Researchers expect intelligent life elsewhere in the universe to behave just like them. Since scientists are mathematical, they expect extraterrestrials to broadcast the digits of pi or the Pythagorean theorem.”

Keats began seriously to question the wisdom of these assumptions while conducting independent research early last year. “If I were an extraterrestrial trying to communicate with beings elsewhere in the universe, I certainly wouldn’t transmit something they already knew,” he argues. “I’d try to express something about myself, as profound as possible, in the most universal language I could imagine: I’d send art.”

The participation of the Magnes was crucial, according to Keats. “While it would be presumptuous to make claims about the religious background of beings elsewhere in the universe, I doubt that I’d have been able to appreciate extraterrestrial artwork had I not been brought up Jewish,” he says. “Growing up in a Diaspora culture has naturally sensitized me to work unacknowledged by, and even laughable to, the mainstream. Approaching art from a Jewish perspective, chief curator Alla Efimova and the entire Magnes staff were completely open to the work I presented.”

The Magnes staff was also open to Keats’s suggestion that the generous loan of extraterrestrial art be reciprocated, and have provided facilities for him to transmit his own abstractions—inspired by works in the museum collection—out into deep space. This unprecedented interstellar cultural exchange will be ongoing for the six-month run of the exhibition.

While the reaction of art connoisseurs elsewhere in the cosmos is not known at this time, preliminary response on this planet is strong. “Jonathon Keats’s art is a persistent, absurdist sabotage of modern rationality and its institutions,” says Efimova. “He usurps the habitual processes and mechanisms of science, law, politics, economics, and religion. Out of these mechanisms he creates ongoing and boundless performances that have no beginning or end.”

Jonathon Keats is a conceptual artist, novelist, and critic. For his most recent exhibition, at Modernism Gallery in San Francisco, he customized the metric system. He has also attempted to genetically engineer God in a petri dish, in collaboration with scientists at the University of California, and petitioned Berkeley to pass a fundamental law of logic – A=A – a work commissioned by the city’s annual Arts Festival. He has been awarded Yaddo and MacDowell fellowships, and his projects have been documented by The San Francisco Chronicle, KQED-TV, and the BBC World Service. For more information, please see http://www.modernisminc.com/artists/Jonathon_KEATS/.