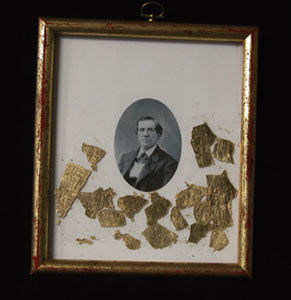 REVISIONS Ann Chamberlain: Fragments of Travel in the Gold Country

In the late 1840s and early 1850s, Jews flooded into the Gold Country of California to stake their claim in the Gold Rush. Over the years many of these prospectors, miners and entrepreneurs found their final resting place in Jewish cemeteries dotting the Sierra foothills. Seven of these cemeteries are under the stewardship of the Judah L. Magnes Museum’s Commission for Preservatin of Pioneer Jewish Cemeteries and Landmarks and they are the inspiration for Fragments of Travel in the Gold Country.

Seven of these cemeteries are under the stewardship of the Judah L. Magnes Museum’s Commission for Preservation of Pioneer Jewish Cemeteries and Landmarks. On October 4, 2004, Bay Area artist Ann Chamberlain created an installation at the Magnes that explored the relationship between cemeteries and museums, sacred ground and secular space, collecting and memory.

Over the last ten years (1994-2004) Ann Chamberlain focused much of her work on the creation of public spaces. She asked “What are the needs in the urban landscape for remembering, engagement, healing, diversity, and dialogue?” In response, Chamberlain looked for “a place where private and public intersect: the place where stories and history begin.” Chamberlain taught at the San Francisco Art Institute and her award-winning public art projects included a collaboration with Ann Hamilton at the San Francisco Public Library, a commission for the California Supreme Courthouse, a joint project with Victor Zaballa at the Mexican Cultural Heritage Gardens in San Jose, and the design for the Cancer Center Story Garden at UCSF/Mount Zion.

Chamberlain’s installation was the first in a series of exhibitions entitled REVISIONS where artists, curators, and scholars are invited to create experimental installations inspired by the Museum’s permanent collections. Chamberlain’s installation called into question why and how we cordon off the past and what kind of boundaries and perimeters—both physical and emotional—are expected to surround the dead.

The exploration of cemeteries congers notions of a rural and nostalgic past. The area that was once Gold Country is now one of the fastest growing regions in California and the rural cemeteries of the foothills are history. Suburban subdivisions have encroached on the pioneer cemeteries, sometimes treating them as blank space beyond the landscaped and watered backyards. Traces of history captured on a tombstone are either invisible or physically locked away. Chamberlain’s work in her own words was about the “traces, imprints, or evidence of passage that holds the shape of human experience and haunt the imagination.” Her REVISIONS installation is the opportunity to investigate the impact of the encroachment of the present on the past.

On the eve of the opening, October 3, Chamberlain and photographer Jason Francisco engaged in a public dialogue with the Magnes chief curator, Alla Efimova, about the notion of loss and retention, remembrance and forgetting and how it relates to the Jewish experience, which is transcribed and added to this page. Francisco’s forthcoming project is a monograph from Stanford University Press titled Far from Zion: Jews, Diaspora, Memory (1998-2002). Francisco describes the photographs in Far from Zion as “a slow, calibrated movement between communal spaces, marked and unmarked historical locations, portraits of contemporary Jews and the events of daily life.”