Never before the creation of the State of Israel did Jews of so many origins live together, and in such a stimulating environment, as they did in the land they soon started calling in Hebrew i-tal-yah, an “Island of Divine Dew”.

A crossroad of world cultures, Italy has been for over two millennia a haven for Italian, Sephardic and Ashkenazi Jews, in the heartland of Christianity. The Italian-Jewish symbiosis flourished with the Modern Era, in the Renaissance ghettos, continuing through the 19th-century Emancipation, and up to the present.

Thus, Jewish Italy appears before our eyes both as a time capsule, where ancient cultural traits have been safely preserved, and as a laboratory, in which such traits were adapted to constantly changing living conditions. While maintaining century-old traditions, Italian Jews also tested out new cultural formats that came to define Jewish modernity. Featured prominently among these are the emergence of women as a foundational constituency of the Jewish social fabric, the printing of the Hebrew Bible and the Talmud as hypertexts, the illustration of Hebrew manuscripts as forms of public “Jewish art,” the public performance of Jewish culture as “entertainment” for society at large, and the cultivation of the synagogue as a porous space fostering multicultural encounters.

Italian Jews successfully negotiated their way across tradition, diversity, religious conflicts, emancipation, cosmopolitanism and multiculturalism, all at the very heart of Christianity. Their vicissitudes mirror the history of the Jewish people at large, both because of Italy’s strong cultural influence upon many European countries, and because of its central place in the Mediterranean. Their cultural wealth progressively lost traction at the turn of the 20th century, and effectively came to a halt with the rise of Fascism and the anti-semitic laws proclaimed in 1938. 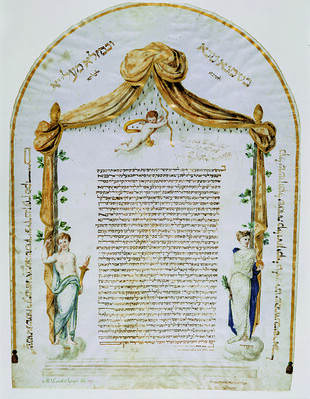 click on the image above to view images of exhibition objects

All major Jewish museum collections include important artifacts from Italy, and the Magnes is no exception. This exhibition presents a selection of manuscripts, books, ritual objects, textiles, photographs and postcards collected by The Magnes over five decades to investigate the global significance of Jewish history in Italy.

I-Tal-Yah: An Island of Divine Dew | Exhibition Catalog (2016) by magnesmuseum on Scribd

I-Tal-Yah: An Island of Divine Dew

Research for I-Tal-Yah: An Island of Divine Dew was made possible in part by funds and resources provided by the Undergraduate Research Apprentice Program (URAP) at the University of California, Berkeley.