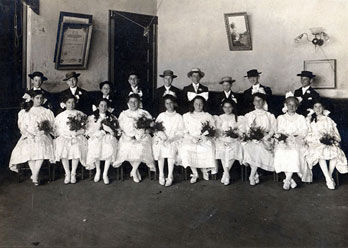 Hidden in the Walls: The Time Capsule from San Francisco’s Lost Sanctuary

In 2003, the Judah L. Magnes Museum and the Jewish Museum San Francisco worked together to create an exhibition around a recently uncovered time capsule found in an old temple on Bush Street.

The Magnes Museum exhibit highlighted the building’s changing role in San Francisco. It was built in 1895 as a synagogue for Ohabai Shalome, a Reform congregation. The temple closed in 1934, and the building became home to an African-American Baptist church, a Zen Buddhist mission, and now is an assisted-living facility for Japanese-American seniors.