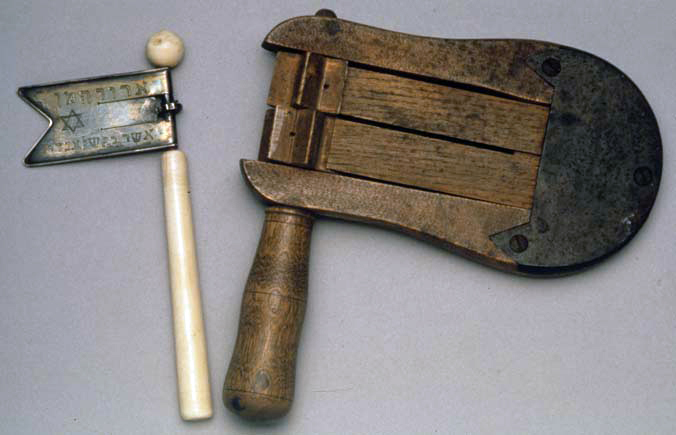 Sound Objects combines the study of Jewish material culture with the emerging field of sound studies and investigates the role of objects that emit sound during synagogue rituals. The exhibition includes a selection of over sixty objects, books, manuscripts and photographs from The Magnes Collection of Jewish Art and Life documenting ritual in the global Diaspora, and integrates on-site display with online resources that comprise images, texts, and the sounds recorded by “playing” several of the ritual objects on view.

Many of the objects used in the course of synagogue rituals generate sound. Some are designed to produce specific sounds, such as the shofar, the horn blown in the synagogue during the month of Elul (preceding the New Year), and on Rosh Ha-shanah and Yom Kippur, or the noisemakers used during the reading of the Book of Esther on Purim. Since the process of Jewish Emancipation in 19th-century Europe, many synagogues have incorporated musical instruments in the ritual, including the organ. But there are many other ritual objects, especially those dedicated to the embellishing, storing, carrying and reading of the Torah scrolls, as well as to the havdalah ceremony that marks the end of the Sabbath and holidays, which are often designed to emit sound, even though sound-making is not their primary function. 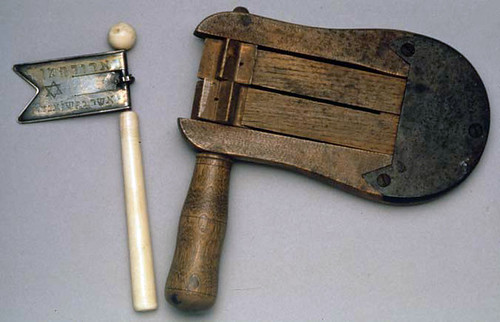 click on the image above to view exhibition images

Jewish ritual “sound objects” are not musical instruments per se. Rather, they are made with movable parts, and are at times adorned with pendants or bells. These objects rattle, ring, or otherwise make sound when they are used. Their sonic power is only apparently unintentional. The sounds they emit cannot be avoided, and sound-making parts are constitutive of their shapes, forms, and functions.

While sound emission by voices and musical instruments during ritual is closely regulated by rabbinic authorities, the sounds made by objects are not. A performative approach to the study of ritual objects may thus shed a different light on an important aspect of Jewish life outside the scope of normative religion, and yet located at its very core: ritual, including the public reading of the Hebrew Bible in synagogue liturgy.

In collaboration with UC Berkeley students:

Case Study No. 3: Sound Objects, curated by Francesco Spagnolo, takes the “Case Studies” series of The Magnes in a new direction. The exhibition was created in collaboration with the students in his undergraduate research seminar, Performing Texts: Music, Liturgy and Jewish Life, offered by the Department of Music of the University of California, Berkeley, with support from the Berkeley Institute for Jewish Law and Israeli Law, Economy and Society, and taught at The Magnes in the Fall of 2012. During the semester students worked closely with the holdings of the Magnes and developed research projects describing select items.