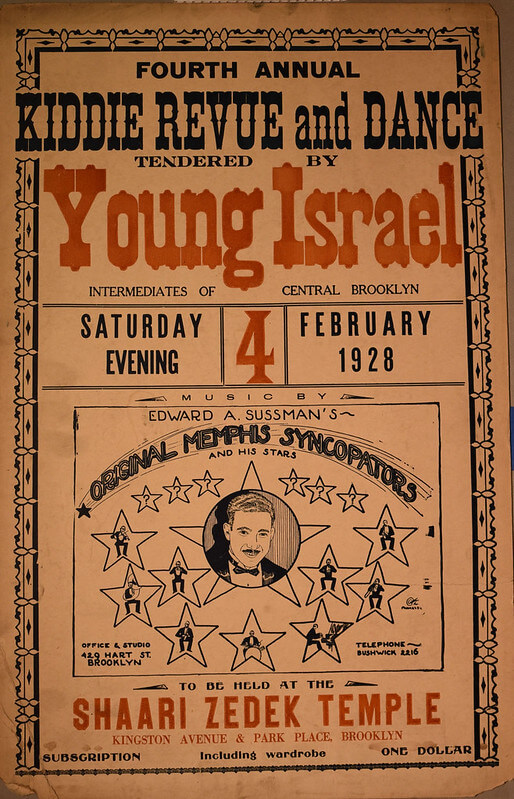 The aim of my project with the Firschein Posters was to discover the histories of the locations advertised by the Printing press. To start it was necessary to locate the addresses and note any changes to the geography itself. Whilst the streets have almost all stayed the same, some streets have been renamed, with the main challenge being the many new structures that have replaced a number of the sites described. Working backwards from what was known of the site location I could attempt to trace the story to the point documented in the posters. This proved challenging in for some locations but with the help of historical documents such as ‘The History of Brooklyn Jewry’ (Abelow, 1937), the rich cultural history of many of the sites was revealed. In some cases the traces are still visible such as a sign that reads ‘The Infants Home of Brooklyn’ at 1358 56th Street, although the building is now the headquarters of the JCCA. In some instances the buildings are occupied by the same group, for example the Jewish Center of Coney Island (Brighton Beach) has remained and was recently placed on the National Register of Historic places.

Whether I could find entire histories of a site, or nothing but the address left on the poster, what the project revealed was a culturally diverse community living in Brooklyn in the mid 1900s. Many of the locations are found within a few blocks of one another, as was powerfully visualised to me through the ‘Findery’ map based on the project. In many cases the locations marked a new home for those fleeing an oppressive reality, such as the Hebrew Alliance of Brighton Beach, which was an early synagogue built in the area, welcoming the large Eastern European Jewish population seeking a new life in America; the site continues this legacy as the home of the Friends of Refugees of Eastern Europe (F.R.E.E.). The posters produced by the Firshein Printing Press stand as a permanent reminder of this important perspective in the history of Brooklyn.

“What a great “journey” for those who view your map, as well as a journey of nostalgia for some of us who once inhabited these neighborhoods long ago.” -Oscar Firschein, donor of the Firschein poster collection