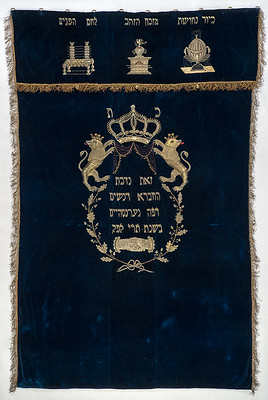 Torah Ark curtains, textiles created to cover and adorn the Torah Ark (the space or structure, within a synagogue, were the scrolls of the Hebrew Bible are stored), are referred to in Hebrew as parokhet (פרוכת). The Hebrew term evokes the curtain described in the book of Exodus, first as a separation between the Holy (qodesh) and the Holy of Holies (qodesh ha-qodashim):

“Hang the curtain under the clasps, and carry the Ark of the Pact there, behind the curtain, so that the curtain shall serve you as a partition between the Holy and the Holy of Holies.” (Exodus 26:33)

and later as the screen before the Ark (of the Covenant):

“He took the Pact and placed it in the ark; he fixed the poles to the ark, placed the cover on top of the ark, and brought the ark inside the Tabernacle. Then he put up the curtain for screening, and screened off the Ark of the Pact—just as the LORD had commanded Moses.”
(Exodus 40:20-21).

The term is also used in the Bible to indicate the screen that separated the “Holy of Holies” from the main chamber (hekhal).

In synagogue life, Torah Ark curtains are often made of precious textiles, decorated with embroideries depicting themes from the Bible, symbolic animals, visual and textual references to the Torah as a crown (such as the Hebrew acronym כת, for keter torah, the “crown of the Torah”), and include embroidered inscriptions that mention the names prominent members of a congregations, donors, or their makers (usually women), but also dates and place names. These inscription feature prominently on the textiles, which in turn are prominently displayed within the architectural space of a synagogue.

The Magnes Collection of Jewish Art and Life includes approximately 50 Torah Ark curtains originating from across the Jewish world, including Europe, North Africa, the Middle East, India, and the United States. They can be searched at magnesalm.org.

Research at The Magnes 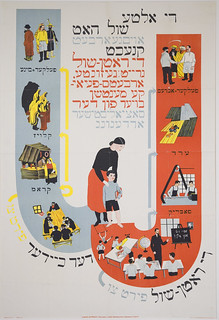 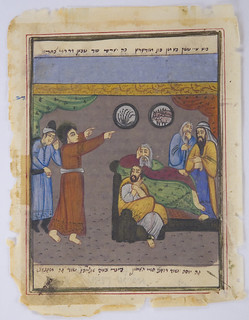