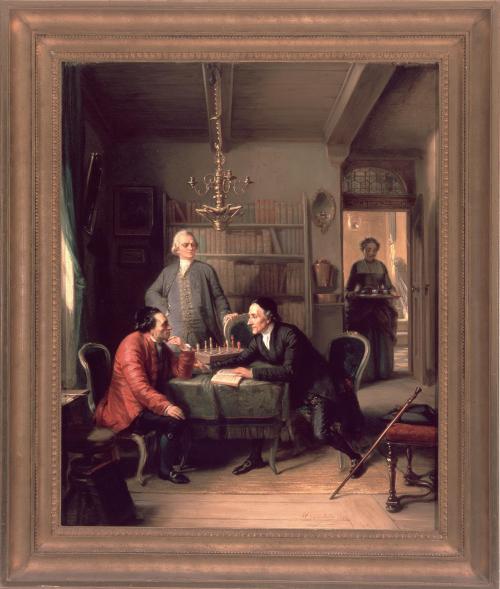 Lavater and Lessing Visit Mendelssohn
Discover more about this project

The painting by Moritz Daniel Oppenheim (1800-1882), portraying an imagined meeting among scholars Moses Mendelsohn (1729-1786), Gotthold Ephraim Lessing (1729-1781) and theologian Johann Kaspar Lavater (1741-1801) in Mendelssohn’s Berlin home, is one of the most prized holdings in the Magnes Collection of Jewish Art and Life. Described and reproduced in articles, books and exhibition catalogs, it appears on the cover of several volumes.

The painting refers to two foundational moments in the history of German-Jewish cultural interactions: the real-life meetings between Mendelssohn and Lavater, which took place in 1763-64 – and the subsequent unraveling of the “Lavater affair,” or the failed attempt on the part of the the theologian to convince Mendelssohn to embrace Christianity – and the much-celebrated friendship between Mendelssohn and Lessing, which in turn became a paradigm of the possibility of a harmonious cohabitation between Germans and Jews.

The scene takes place at the residence of Moses Mendelssohn, located at Spandauerstraße 68, Alt Berlin. Mendelssohn is depicted on the left, wearing a red coat and a skullcap, seated at a chess table in his library with Lavater. Lessing stands at the center behind the two. Above them hangs a brass lamp (combining a Sabbath lamp, or Judenstern, with a four-branched chandelier for everyday use). A servant at right is holding holding a tray, under a door surmounted by an inscription drawn from a Hebrew blessing: “Blessed shalt thou be when thou comest in, and blessed shalt thou be when thou goest out” (ברוך אתה בבואך וברוך אתה בצאתך; Deuteronomy 28: 6). Behind them, on the back wall at the left of the scene, hangs a mizrach (מזרח, Heb. “East,” a plaque indicating the direction being faced during prayer).

Examine this image with the MemoryMiner viewer