A "Scroll of Esther" (Heb. מגילת אסתר, megilat ester) is a manuscript copy of the biblical Book of Esther, which recounts the story of the salvation of the Jews in the Persian Empire, read in synagogues on the Evening and Morning Services of the holiday of Purim.

Decorated manuscripts and embellished scroll cases have been created for use in many communities throughout the Jewish Diaspora since the early modern period, varying in materials and styles. Made for individual users, but read publicly during synagogue services, these objects lay at the intersection between the spheres of personal ritual and synagogue life. The materials, shapes, and the overarching aesthetics presiding the making of embellished megilot are indicative of the social and cultural characteristics of their makers, of  the patrons who commissioned them, and the communities they belonged to.

The museum holdings of The Magnes Collection of Jewish Art and Life include over fifty Scrolls of Esther, created between the 17th and 20th centuries in Italy (where the practice of embellishing the scrolls originated) and other regions of Europe, North Africa, the Middle East (including modern Israel), and the United States. 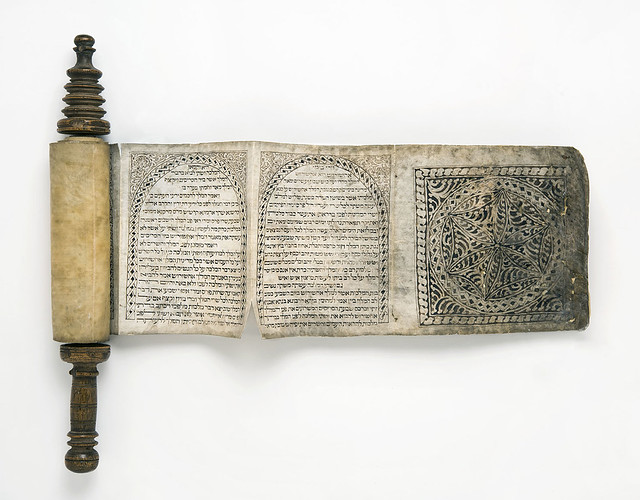 Shalom Sabar (The Hebrew University of Jerusalem) thus describes the history of decorated Esther Scroll manuscripts in the Encyclopaedia Judaica:

Since the talmudic period it has been customary to write the Book of Esther on parchment in the form of a scroll, and the rules governing its production and writing are basically the same as those for a traditional Torah scroll. It is not known when and under what circumstances artistic embellishment of Esther scrolls began. The earliest extant illuminated Esther scrolls emanate from 16th-century Italy, commissioned by well-to-do Italian Jews. Cylindrical or polygonal cases were often made to house such scrolls, often provided with a crank handle to roll the parchment through a vertical slot. Cases were made of copper, tin, and wood, but fine silver and some ivory cases have survived as well.

The decoration and illustration of Esther scrolls, mostly by unknown Jewish artists, reached its height during the 17th and 18th centuries, in Italy and other countries in Europe, particularly Holland. The great demand for an illustrated megillah led the makers to produce engraved scrolls, printed from copper plates, while the text was still copied by hand, as required by Jewish law. Some of the best-known engraved Dutch megillot were produced by the Jewish engraver Shalom Italia (1619–1664?), born and raised in Italy.

The decorative programs of Esther scrolls usually depict the Esther story in great detail, one episode after the other. The episodes usually refer directly to the text column in the center, but often include midrashic elements. The narrative scenes are often set in exquisite landscapes or contemporary buildings. Other forms of decoration include architectural elements, allegorical representations, nude putti, the signs of the Zodiac and the twelve tribes, heavenly Jerusalem, and scenes that reveal the daily life of the Jews of the time, particularly scenes related to the celebration of the festival.

Outside Italy and Holland figurative representations in megillot appear among the Ashkenazi communities in German-speaking lands: Germany, Austria, Bohemia, and Moravia. Many of the attractive megillot from these lands were produced by the scribe-artists of the so-called "Moravia School" of Hebrew illumination (for example, Aaron Wolf Herlingen of Gewitch or Meshullam Zimmel of Polna). Noteworthy are also the fine silver cases from these lands, at times engraved with the Triumph of Mordecai or other central episodes in the Esther story. Some figurative scrolls are also known from Poland and France (Alsace).

Examples of decorated megillot are extant from Turkey, Greece and the Balkans, and Morocco, where they were mainly decorated with floral, architectural, or other decorative designs. Megillot from former centers of the Ottoman Empire were often housed in ornamental silver cases – megillot from Istanbul in exquisite gold-plated silver cases made in a delicate filigree technique. In other lands of Islam and the East, decorated megillot were not as common. Notable are the colorful megillot of Baghdad, which feature in large capitals along the upper border a long list with the genealogy of Mordecai (tracing him back to Abraham) and contain Haman's genealogy, upside down, going back to "wicked Esau."

The art of the illustrated scroll, which declined in the 19th century, was revived in the 20th by artists of the Bezalel School, [and] Ze'ev Raban (1890–1970) in particular, who created megillot with images showing the influence of Persian miniatures mixed with Western-Orientalist symbolic elements. Side by side with the new hand-illuminated megillot, graphic artists in the Land of Israel joined efforts in issuing colorfully decorated printed Esther scrolls, which were far less expensive and thus popular, especially in the early days of the young state. With the improvement of the conditions of life and renewed interest in Jewish tradition in the late 20th century, young artists, including women, revived the art of the hand-illuminated megillah.