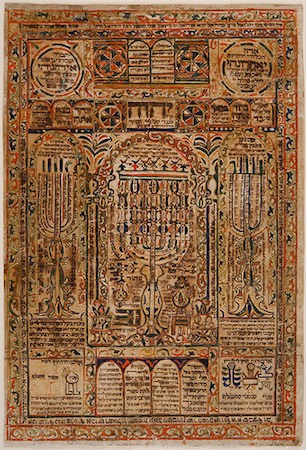 Shiviti manuscripts, found in Hebrew prayer books, ritual textiles, and on the walls of synagogues and Jewish homes, have been produced since the early-modern period. Wrestling with ways to externalize the presence of God, these documents center upon the graphic representation of God’s ineffable four-letter Hebrew name, the Tetragrammaton. The four letters, yud-he-vav-he, serve as a source of inspiration in prayer and daily life. They are often associated with words and imageries that evoke mystical powers, protective energy, and angels, as well as with key places and characters from the Bible and Jewish history.

Deciphering the content of a shiviti, or simply classifying it within the realm of cultural production, is a fascinating puzzle for today’s scholars. Research on these documents encompasses the analysis of biblical and prayer texts, magical formulae, visual motifs, and material culture across the world. The very presence, and use, of the shiviti in such varied contexts as individual and communal prayer, the celebration of life cycle events, and the production of (and demand for) amulets for personal and household protection, opens new paths for understanding the role of text in Jewish life. The persistence of these documents into the present, including the Internet, attests to the ongoing beliefs in the power and efficacy of magic and meditation that accompany the more normative aspects of Judaism as we know them.

God’s four-letter name has not been voiced in Jewish tradition since the 1st century CE. In prayer and in everyday discourse, it is instead substituted with words such as adonay (“my Lord”), elohim (or ha-elohim, “the [true] God”), shem (or ha-shem, “the Name”). Though soundless, the four-letter name has a powerful graphic presence, which is central to the layout of shiviti documents. Thus, the Tetragrammaton is often placed at the top of book pages (usually sidurim, prayer books), synagogue textiles (typically covering the Torah Ark), paper and parchment plaques affixed to walls in public and private places, and even on silver jewelry pieces, to be worn as amuletic necklaces, protecting a body or hanging by a newborn’s crib.

In shiviti documents, the letters of the Tetragrammaton are accompanied by texts and visual motifs—inspired by Jewish mystical and magical traditions—that provide a vivid landscape for the graphic presence of God’s name. The words, shiviti [yud-he-vav-he] le-negdi tamid, a verse from Psalm 16 meaning “I have set yud-he-vav-he [the four-letter Name] before me always,” are omnipresent. So too is the full text of Psalm 67—comprised of seven verses (with a short preamble) that invoke unending divine blessing—written in the shape of a seven-branched candelabrum, or, in Hebrew, menorah.

The contemplation of the shape of the menorah, and the related evocation of the number seven, are at the core of shiviti production across the Jewish world. Along these lines, Jewish traditions have continuously added new textual and visual elements to the shiviti, localizing it and adapting it to a variety of uses and possible interpretations. These elements range from visual and textual representations of the Temple of Jerusalem and other holy sites in the Jewish tradition, to magical formulae (often based on elaborate acronyms derived from biblical and prayer texts), the names and graphic representations of angels protecting pregnant women, newborn children, and Jewish homes, as well as to an array of texts that evoke the number seven, and thus the mystical powers attributed to the menorah.

The seemingly crucial role of the menorah in the structure of these complex, and esoteric, documents, prompts questions that resist any simple answer. Viewing shiviti documents inherently implies “setting them” before oneself, as their text demands. Are the graphical representations of God’s name, or of the menorah itself, central to the shiviti? Is its power manifested in the intentionality (Heb. qavanah), and related physical posture and gesture, of the individuals contemplating it? Or is it instead the motion of the viewer’s eyes while following the convoluted contortions of the Hebrew words and menorah imageries, and thus the very act of reading sacred texts in a markedly non-linear fashion, the secret that each shiviti still holds for us?

The slideshow on this page highlights a selection of shiviti manuscripts, books, amulets and textiles from The Magnes Collection of Jewish Art and Life.