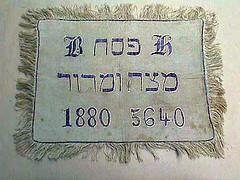 Passover textiles include specially designed covers for the matzah (Heb. מצה; Yiddish matsoh), the unleavened bread eaten during the Passover Seder, and pillow cases used to cover pillows on which those attending a Seder ritually recline.

The materials and shapes of these ritual textiles vary through time, and from place to place. The often round form of earlier examples (mostly from Central and Eastern Europe) follows that of hand-made matzah, and may include separate compartments for the three pieces of matzah eaten during the different stages of the Passover Seder. The rectangular or square shape may instead reflect that of modern, often machine-made, matzah.

The textiles are often inscribed in Hebrew, with words lifted from the Passover Haggadah, the ritual text read during the Seder. They may also include dates, initials, and names of their makers.

Among the Passover textiles in The Magnes Collection of Jewish Art and Life is a matzah cover from San Francisco, dated 1880.