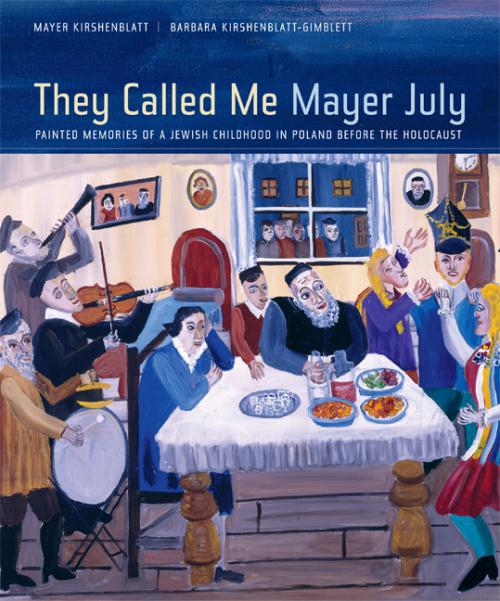 They Called Me Mayer July. Painted Memories of Jewish Life In Poland Before The Holocaust – 09.10.2007

Berkeley, CA – Mayer Kirshenblatt, now 91 years old, first picked up an artist’s brush at the age of 74. They Called Me Mayer July, the first major exhibition of Mayer’s work in the United States will premier at the Judah L. Magnes Museum on September 9, 2007 with a special program and book signing with the artist. The exhibition, curated by Alla Efimova, chief curator at the Magnes, will remain on view through January 13, 2008.

Following the presentation at the Magnes, They Called Me Mayer July will begin its international tour to museums in Atlanta, New York, Amsterdam.

The exhibition is a tribute to Mayer Kirshenblatt’s distinctive imagination and sharp recollection of his Polish Jewish home town before World War II, with images such as: the pregnant hunchback, who stood under the wedding canopy just hours before giving birth; the khayder teacher caught in bed with the drummer’s wife; the corpse that was shaved; and the “black wedding” in the cemetery during a cholera epidemic. The Magnes installation creates an immersive environment in which narrative images are supplemented with an audio component.

In conjunction with the exhibition of sixty-five paintings, the museum is pleased to announce a companion publication from University of California Press. The 411 page volume includes 196 color illustrations and 11 black and white drawings. The exhibition and the book are the result of four decades of conversations between the artist and his daughter, Barbara Kirshenblatt-Gimblett, highly acclaimed scholar of East European Jewish culture. This unique project is a blend of memoir, oral history, and visual interpretation.

This exhibition has been made possible through a grant from the Taube Foundation for Jewish Life and Culture and the generosity of Jean and Sandy Colen, Varda and Irving Rabin, and Katie and Amnon Rodan.

About Mayer Kirshenblatt
Mayer Kirshenblatt is a self-taught artist living and working in Toronto. Born in Apt (Opatów in Polish) in 1916, he arrived in Canada in 1934 at the age of seventeen. After apprenticing to an electrician and cobbler in Poland and working in a sweatshop in Toronto, he painted houses and eventually opened his own wallpaper, paint, and floor covering store. In 1990, he began to paint everything he could remember about his hometown and his childhood there. Since then, he has exhibited his work in several solo, as well as group exhibitions at The Jewish Museum (New York), in Toronto at the Aird Gallery, Koffler Gallery, and Canadian National Exhibition, and in an exhibition organized by the Smithsonian Institution.

About Barbara Kirshenblatt-Gimblett
Barbara Kirshenblatt-Gimblett began interviewing Mayer in 1967 and has continued to do so until the present. She received her PhD in folklore at Indiana University and is currently Professor of Performance Studies at New York University. Her books include Image before My Eyes: A Photographic History of Jewish Life in Poland, 1864-1939 (with Lucjan Dobroszycki); Destination Culture: Tourism, Museums, and Heritage; and The Art of Being Jewish in Modern Times (edited with Jonathan Karp), among others. She is the recipient of many honors, including a resident fellowship at the Getty Research Institute and the Guggenheim fellowship.