Power of Attention: Shiviti Manuscripts at The Magnes

Over the course of this year, our Magnes Graduate Fellow, Yosef Rosen, in collaboration with our former Undergraduate Research Apprenticeship Program (URAP) student, Zoe Lewin, worked extensively with The Magnes’s shiviti manuscript collection. The fruits of their research and labor will be featured in an upcoming exhibition in Spring 2017, appropriately (tentatively) titled “The Power of Attention.” In addition to the PopUp exhibition both Yosef and Zoe co-presented, the two Magnes scholars co-authored the following blog post that synthesizes the historical, cultural, and religious significance and contexts of the shiviti collection at The Magnes.

Shiviti plaques occupy a rare niche among Jewish objects: portraits of and portals to the divine. Jewish graphic-art more often engages with earthy and angelic imagery, while the creation of divine images is left to the imagination and to the metaphors of poets. But in the 17th century, the spiritual intensities of Lurianic Kabbalah began to inspire Jews to search for new ways to actualize the mandate of the Psalmist – “I place [shiviti] the Lord before me, always” (Psalms 16:8). By what artistic means can the devotee place the divine before herself at all times? The Shiviti plaque is a deft artistic answer to that religious conundrum. It capitalizes on the artistic power of Hebrew letters to transform text into picture. Shiviti plaques use the Hebrew letters of verses from Psalms, esoteric divine names, acronyms of scriptural sentences, and magical formulae to craft a dense and layered object of devotional art. By offering a collage of sacred letters to the viewer, each Shiviti plaque becomes a meditative icon, calling the devotee back to religious attentiveness.

At its core, the Shiviti plaque combines two separate Jewish traditions: (1) a 17th century, Kabbalistic practice of placing a piece of paper inscribed with the ineffable name of God, יהוה, into one’s Siddur (prayer book) as an aid for concentrating on the power of the divine letters during prayers, and (2) a 14th century, Italian tradition to incorporate in the Siddur a drawing of the menorah (the seven branched candelabrum of the Temple) composed out of the letters of Psalm 67 (an attempt to artistically connect the ancient Temple service with the practice of praying Psalms). What these two traditions share is an emphasis on the virtue of visualizing and meditating upon letters during prayer. At first these two strands of traditional Jewish devotion converged within religious books, as the earliest instances of the commonly recognized Shivti are found in the opening folios of some eighteenth-century Hebrew books. Only in the late eighteenth-century did people begin to create Shiviti’s as independent plaques intended to be hung on a wall (typically for a home or synagogue). We don’t know exactly when or where these two traditions merged. What is certain is that their union generated a new, religiously robust, Jewish object that rapidly became popular across Europe, Morocco, India, Palestine, and almost anywhere else Jews lived.

these works of devotional art developed in a variety of regional styles and incorporated other aesthetic motifs into their devotional schemas. One of those transformations involved new interactions between amulets and Shiviti plaques. Magical formulae abound in many of the collection’s Shiviti plaques, probably because they were viewed as an appropriate, religious location for invocations of angelic powers and spells against evil powers. Some plaques 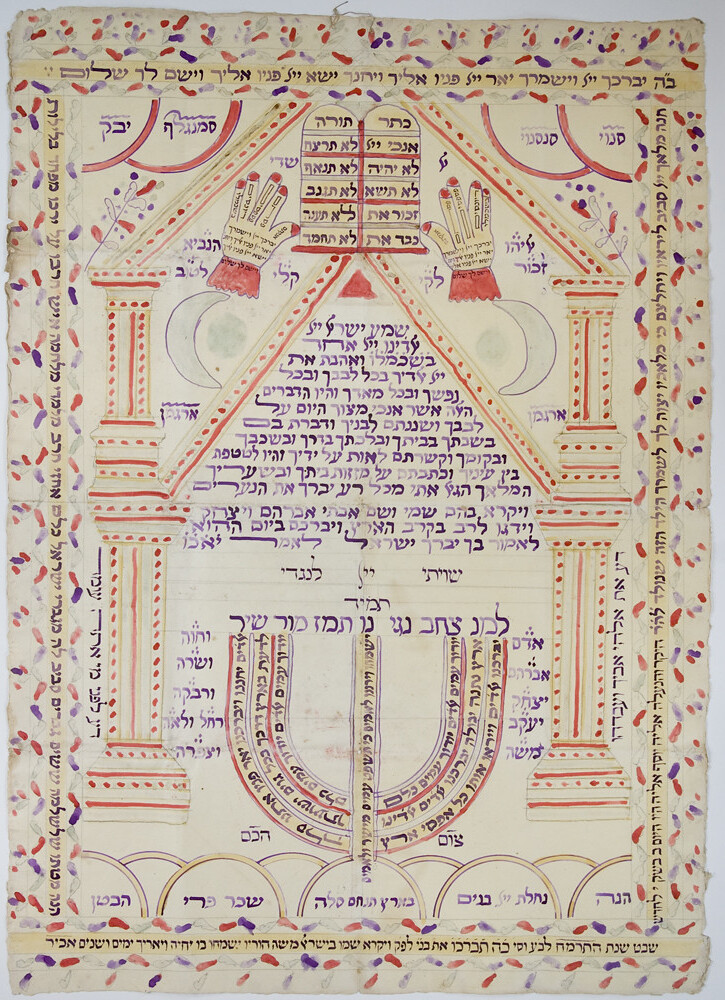 in the collection even make use of the infamous amuletic angels – sanui, sansanui, and samanglaph – thought to ward off Lilith’s demonic efforts to kill children. One 20th century, Indian shiviti plaque 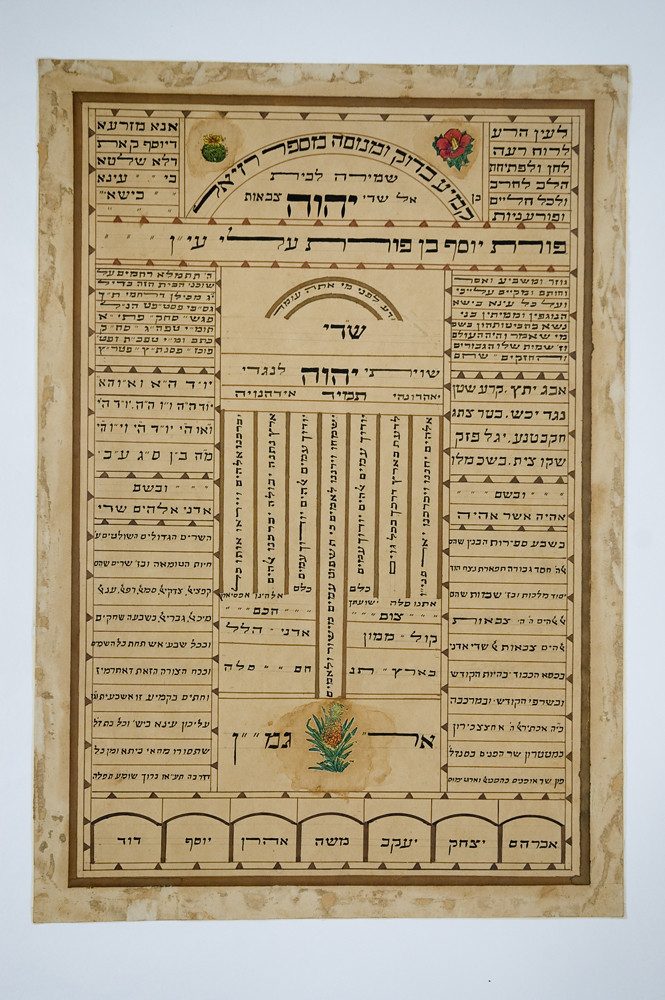 in the collection specifically refers to itself as an amulet (kami’ah) for home protection, and makes explicit use of the magical traditions of “Sefer Raziel” (a collection of mystical, cosmological, and magical Hebrew works first printed in Amsterdam in 1701). Another 19th century shiviti from India 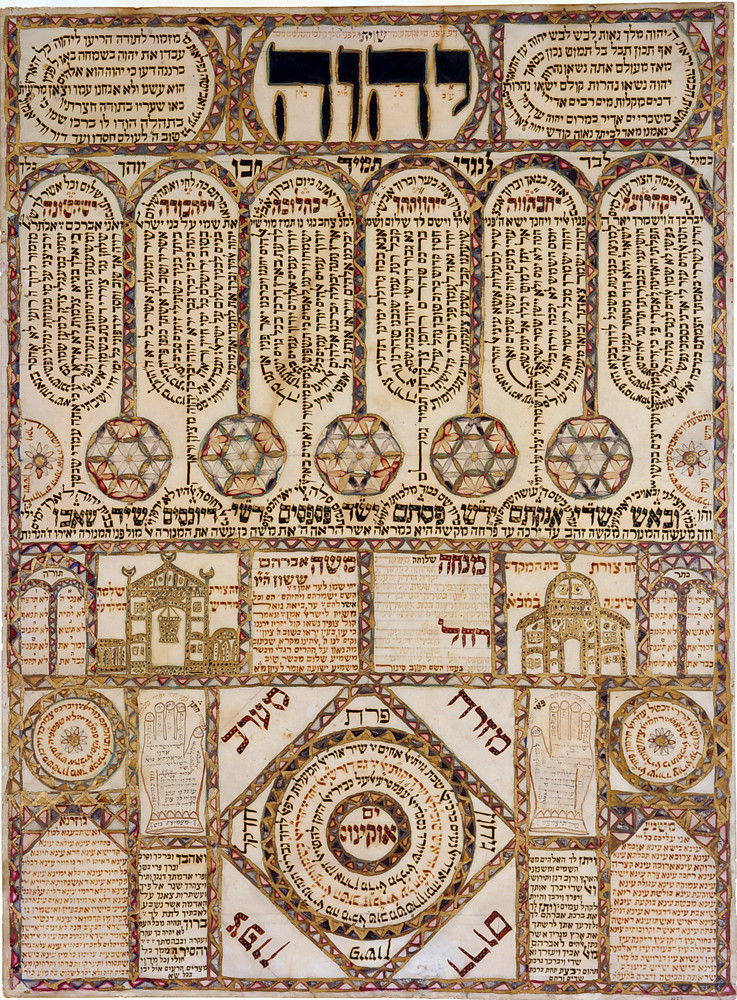 presents itself as an amulet capable of assisting its owner’s pregnancy, here, likely, a wife in the Sassoon family, influential Iraqi Jews who established an international banking and mercantile empire in Bombay (present day Mumbai), and great benefactors of the Indian Jewish community. In these examples, devotion and magic intermingle, and Jewish objects that developed with one aim are appropriated for other communal and personal needs. Like many Jewish objects, Shiviti’s can fulfill different aesthetic functions – often at once. And it is likely that this pliability helps account for their wide cultural success. As we studied each of the Shiviti’s in the Magnes collection, we found the concept of “intersectionality” a helpful one. Coined by Kimberle Crenshaw, the term “intersectionality” is often used to describe the multifarious race, gender, class, religious, and other identities that an individual navigates. In investigating the myriad identities and roles of Shiviti’s, we began to understand how these perplexing, devotional objects spread throughout the diaspora and remained popular for centuries. The intersectionality of Shiviti plaques is most evident in the many plaques that combine elements of magic and letter-meditation. But we also found that many Shiviti plaques in the collection engage with a wider constellation of Jewish, art formats: memorial art (for the recently deceased) 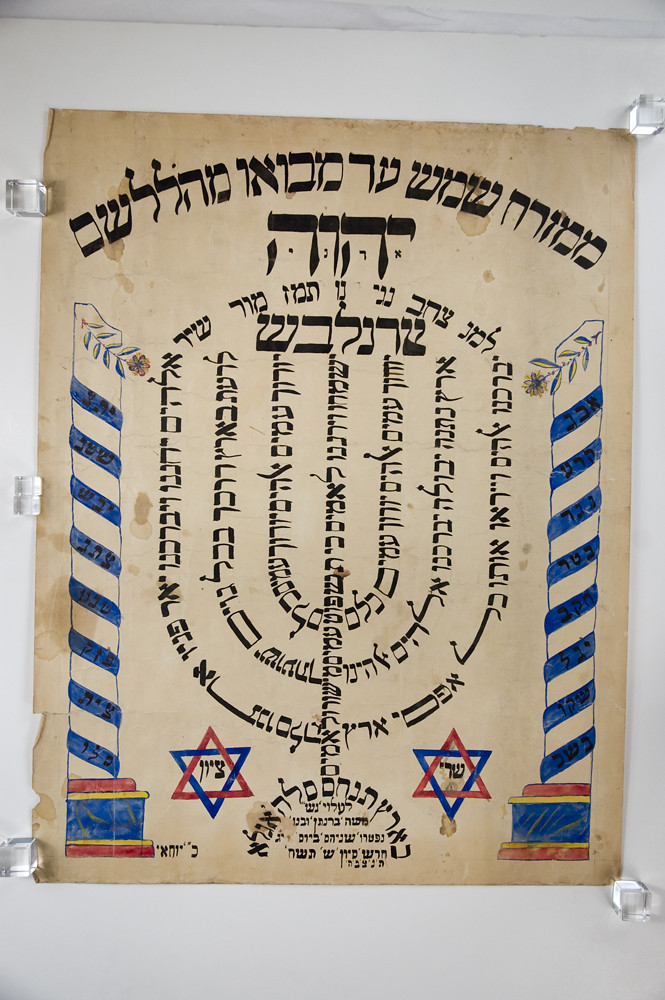 mizrach art (plaques placed on the eastern wall of the home or synagogue), 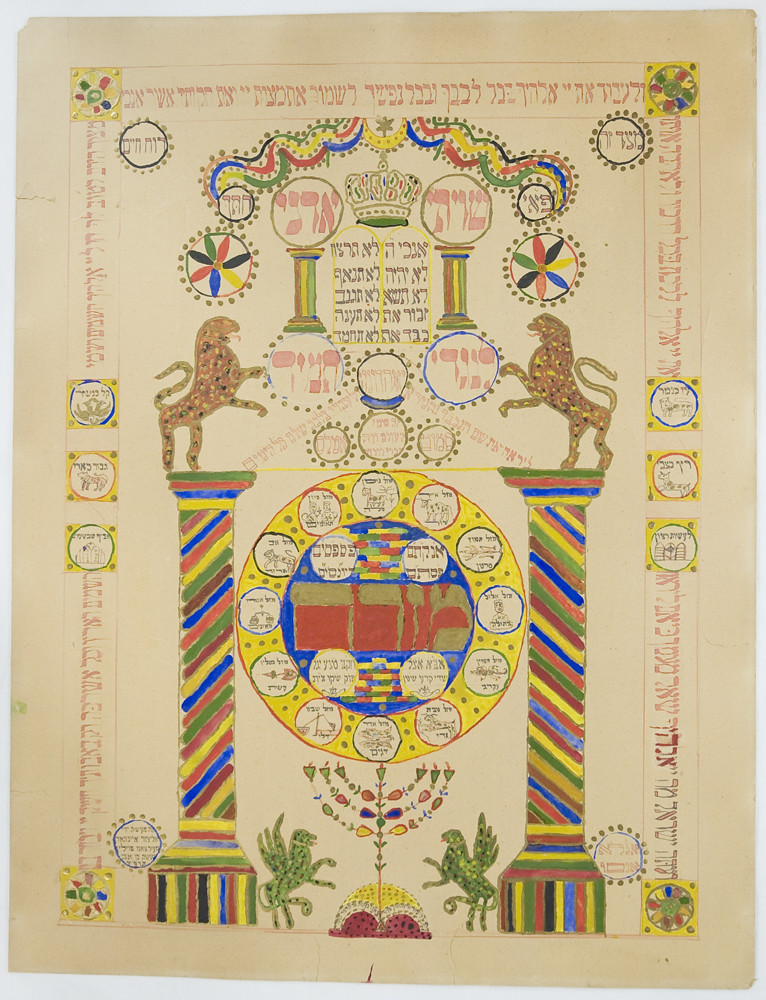 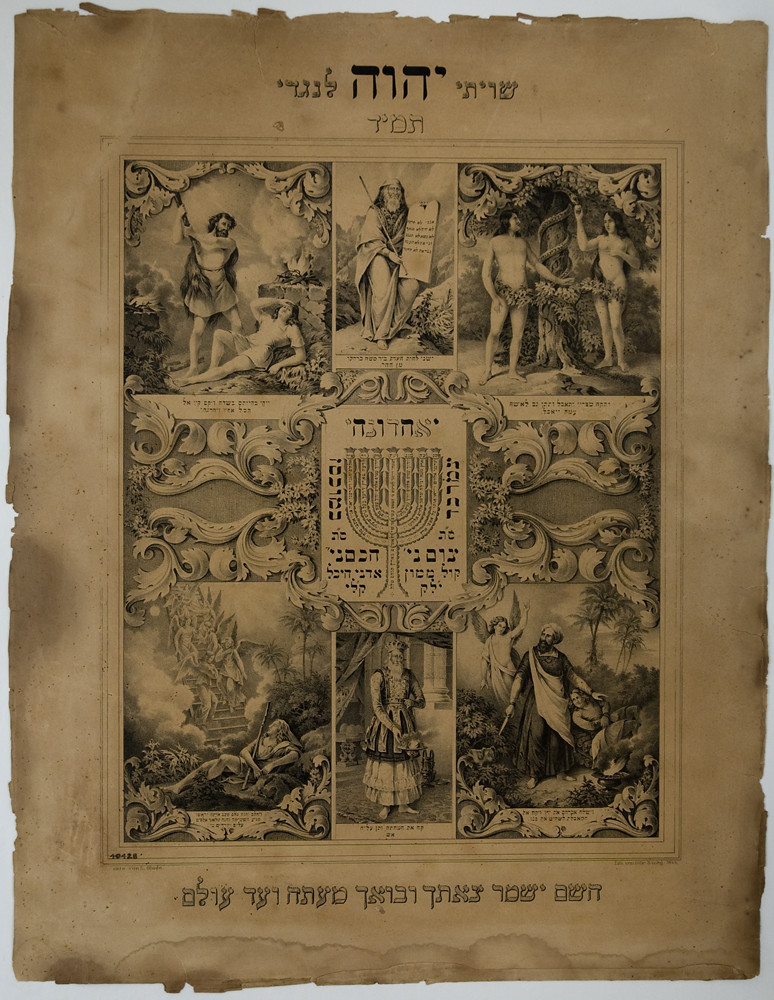 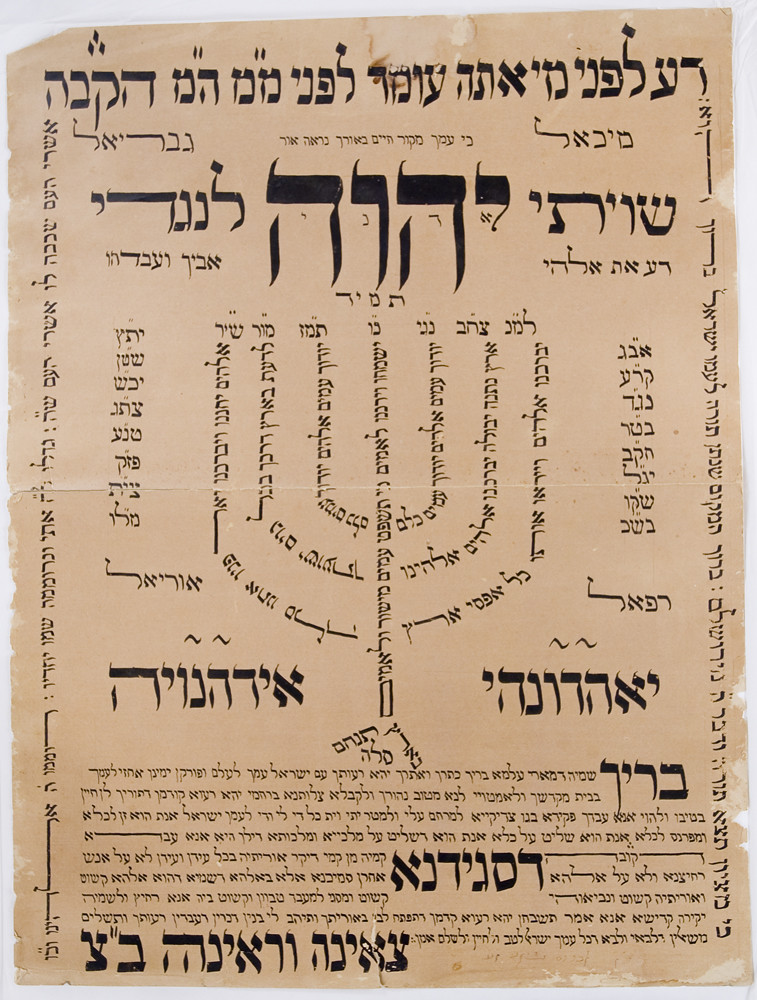 These morphing usages of Shiviti motifs in multiple geographical contexts 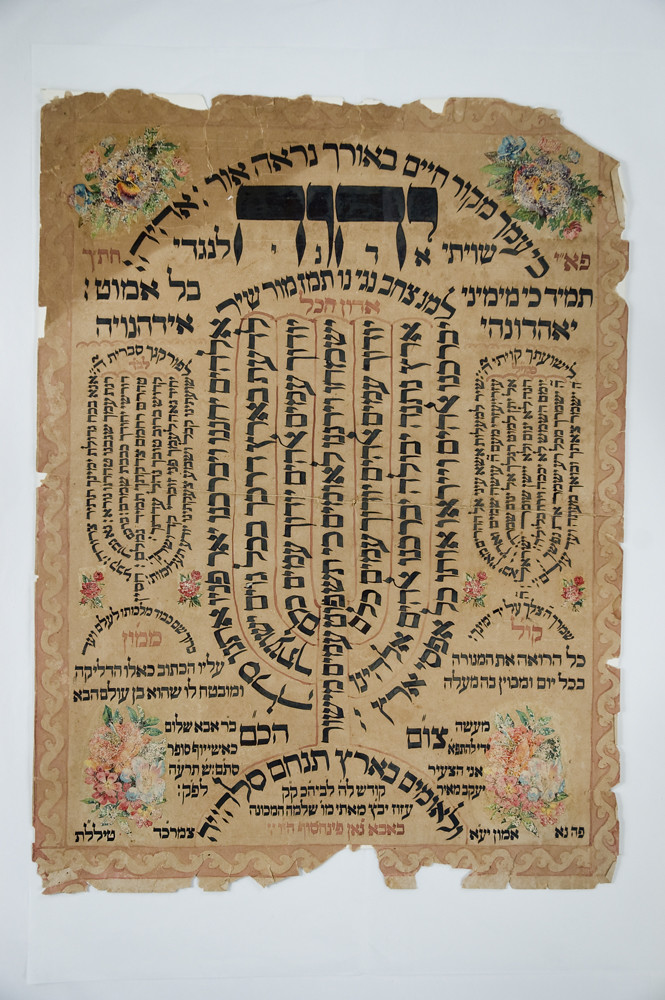 highlight the popularity and mutability of Jewish devotional art practices. The thirty-three Shiviti’s in the Magnes collection display an artistic diversity that can teach us about modern experimentation with Jewish devotional art. What began several hundred years ago as a drive to make the divine palpable during prayer, has, over the course of the past three centuries, become an artful exploration of the modern bonds that exist between devotion, magic, and aesthetics.